Yesterday I was a pure "Domestic Goddess" thanks in part to making Ree's recipe for chicken spaghetti. I've made several versions of chicken spaghetti over the years, this one beats them all. It was outstanding. The only changes I made was to use chicken breasts instead of fryer parts. We always have some of those frozen boneless, skinless chicken breasts in the freezer, so I just took out about 3, boiled them in plenty of water so there'd be enough to boil the spaghetti in and for mixing in the casserole, as she directs, and it worked out well. I also used only one can of cream of mushroom and then used one can cream of chicken, just because it sounded better. And the only other thing I might change the next time is to saute' the peppers and onions a little before adding them to the dish, because they were a little crunchy (even though I chopped them very finely) and I just don't "do" crunchy veggies unless by crunch, we're talking fried...as in fried okra, fried green tomatoes, fried squash...you get the picture. But no one else complained and in fact, loved it just as it was. Wonderful.

Also made a sheet cake similar to Ree's recipe. Mine is just called Texas Sheet Cake, it's been around for a hundred years and while the recipe is very close to hers, there are a few differences and I like my recipe better, maybe because I've made it forever and know it by heart. So go look at hers, then come back here and use my recipe:

Preheat oven to 375 degrees.
In large bowl, stir together flour and sugar, set aside. In small bowl, beat the eggs a little, add the buttermilk and vanilla, set aside.

Place the two sticks of butter, 1 cup of water and cocoa in medium saucepan. Bring to rapid boil and then pour over flour and sugar mixture, stirring until well mixed. Add in vanilla, baking soda and cinnamon and then quickly stir in the buttermilk mixture and stir until well combined. Pour into large jelly roll pan (or large cookie sheet) that has been greased and floured (I use Baker's Joy spray and just give it a few sprays), spread evenly.

Place in preheated oven and bake for 20 minutes. 5 minutes before cake is to come out of oven, start the frosting.

Remove cake from oven and spread with frosting while both are still hot.

Wait about 20 or 30 minutes to slice this (if you can) and you will be in sheer Heaven. 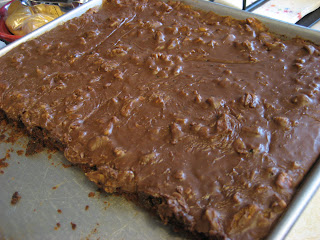 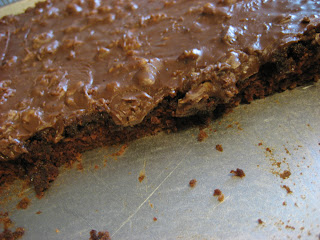 In addition to my culinary works of art yesterday, I worked on this a little: 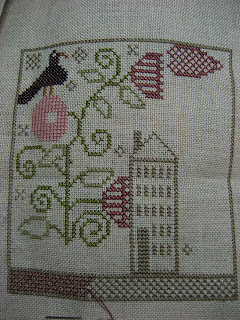 It's a Ewe & Eye & Friends design called Heart in the Garden.

It's from that wicked basket of mine...so small and fun to work on, I don't know why it just sits there, waiting for me...maybe because I have ADD when it comes to my stitching, I just want to stitch everything, lol!

Also helped my little bachelor with a post to his blog, he was down about it because it had been a while since it had gotten any attention and if there's one thing this baby loves, that's attention! 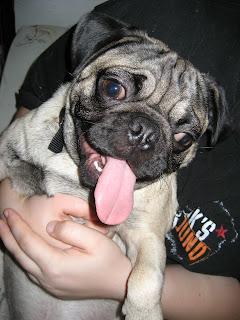 Oh, and speaking of attention, thanks SO much to those of you kind enough to leave me nice comments. I really appreciate and enjoy them so much! You are so kind :)

Thanks for the recipes and I love Heart In The Garden

Heart in the Garden is so pretty and looks like a fun stitch! I will definitely be trying that Chicken Spaghetti recipe, and please save me a piece of that sheet cake - it looks wonderful! Your little pooch is too cute.

I adore Texas chocolate sheet cake!!! Mmmmm
My dad's 2nd wife use to make that. And it was pure heaven. (she was from Texas too.)

mmm, I haven't had Texas sheet cake in so long. The only problem with this cake is that you want to eat the whole pan, lol. :) Nice progress on your E&E&F wip. Thanks for coming over to my recipe blog!! Did you find all the WW recipes there?

My sheet cake is cooling as I type this. WooHoo!!! One good thing about "Aunt Flo's visit." We can gorge on chocolate and the world understands. TeeHee

Ted said, "I wish I had some vanilla ice cream to go with it."

Andrea, I didn't mean it was strange in a bad way...just that it was unlike any other recipe that I had ever made. It was delicious!