There are probably not really dumb dogs, only dumb OWNERS.
We'd never let our dogs out in the yard alone all day so that the only excitement they ever had was to bark at people or the wind out of loneliness...
and we'd never let our dogs run around loose so they could chase cars and risk getting run over. I mean, H E L L O....they're just animals, right? And they all depend on us humans to help them along when they feel the need to just be themselves and maybe act a little nutso. Poor babies. It really is upsetting when you think about it...I just can't stand the thought of people neglecting or abusing animals!

Anyhoo....more pictures of previous stitching from the old blog, just for your viewing pleasure :)

This one is a deisgn by The Goode Huswife, called "With My Needle" 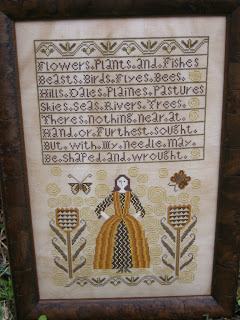 And this one is a Carriage House design called "Big Fish" 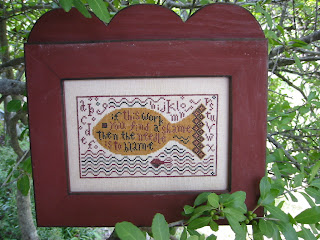 And an ornament from one of the JCS Ornament Issues, can't recall which one, but the designer is Little by Little 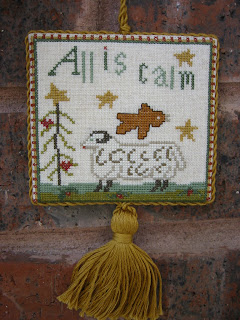 Will post a few more pictures from my old blog in the next couple of days and also! Two new pillow finishes from dear Tobie. Stay tuned!
3 comments: 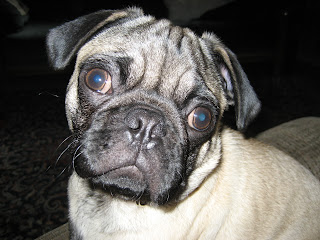 Does that face look very innocent to you? I'm just askin' is all.

He may not be so innocent, but at least he's not DUMB. And there are some dumb dogs in the world. Two breeds of which come to mind right away, (but I won't say which ones so I don't offend anyone reading this that might have one as their baby). One of the two just barks their fool head off all the time for no reason. Our neighbor has one of these. They have lived next door to us for at least 5 years and so you'd think this dumb dog would know us by now and not bark at us when we pull into our garage or do things in the backyard. But NO. Bark bark bark bark bark, the whole friggin' time. And it's not just him (or her), every single one of these I've ever known have been idiots. But they're pretty I guess.

The other dumb breed, I swear, if I'm lyin' I'm dyin', the last four of them I've seen of late have been IN THE ROAD chasing oncoming cars!! They probably weighed like 3 pounds MAX and yet here they were, snipping at tires (that were moving). Plus they're mean as hell and they shake a lot and they're ugly when they get fat, which they always do.

I know Pugs aren't for everyone. But at least they're not stupid. Well, not our Pugs, anyway. We're not dog people, we're Pug people. Well, really... cat people, but that's a whole other issue.

Not ONE single recent finish to show today, so here's something I posted on my old blog last year. 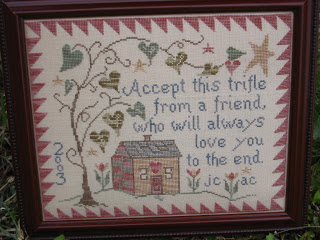 It's an older Blackbird Designs called "Trifle for a Friend" and I stitched it for my husband, he's my best friend :) (hi hon)

Today is my second Weight Watchers meeting day, so I will weigh in and see if I lost anything after being back on the program for a week. Hopefully it'll be good news!
I have to think about a swimsuit for my trip to the Jersey Shore this summer and don't want to get harpooned while I'm there!

the longest week, ever

That's how this past week as felt to me.

Last Tuesday a co-worker was killed in an accident. There's a small article on what happened here.

I worked with Steve almost every night at my job and you just don't think about how much a fellow worker is a part of your life until they are gone.
Steve was the life of our workplace.
He would do anything for anyone at anytime, and that is no exaggeration.
If you said "Steve, I need you to give me the shirt off of your back", he would do it and not even ask why you needed it.
He was very knowledgeable about many different things and if a question would come up about something, the inevitable phrase you'd hear would be "Ask Steve".
We all would try and stump him with trivia questions, not an easy task, ha.
He loved to fish and hunt but he was a "catch and release" kind of guy and would not kill something just for sport.
He was a big fan of my baking and made it a joy to make something to take to work. He loved life, his family and his job.
I have determined in my heart to be more like him and do so in his memory.

So...on the stitching front, this is all I have finished lately: 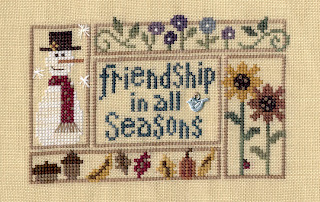 It's a gift for a friend but is waiting for final finishing before I can send it to her. Meanwhile I am working on the newest Loose Feathers called "Their Song" and a Scarlet Letter sampler, "And All for an Appil" and of course, the Village. Hope to update here soon with more pictures.