one flag and some insomnia 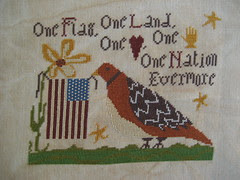 design by Hands to Work 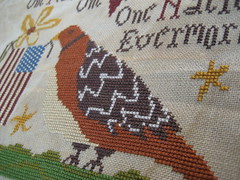 A very enjoyable stitch! Plans are to have it made into a pillow. It will look good beside this one, don't you think? And this one too, once they're both made into pillows that is ;-) 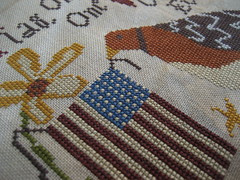 (I am changing how I post pictures, because blogger was driving me crazy since I changed it over to the "easier" version...anyway, you can still enlarge the pictures by clicking on them, it will take you to my Flickr page, and all the sizes are available for download there).

Lately I've had terrible bouts of insomnia. I'm a night owl anyway, but the past few weeks have been really worse, maybe it's just hormones, who knows. Anyway, I've been productive at least, as evidenced by these yummy garlic and onion croutons 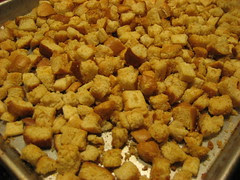 I am probably the last person to catch on to the fact that homemade croutons are better and cheaper than store bought, but there it is. My oldest daughter calls these "crack-tons", so reckon that means they're pretty good. I just saved leftover buns, bread, misc. whatevers that were perfectly fine but going stale, kept collecting them in the freezer until there was enough (a lot). Cut it all up into cubes, sprinkled heavily with garlic and onion powders, then olive oil and baked them in a slow (250 or 275 degree) oven until they were crispy. Took about an hour I guess, stirring them every 20 minutes or so.

Then, I made these out of a free baguette that I'd gotten from Central Market: 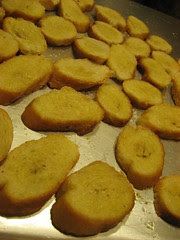 Just sliced the baguette up, brushed with some extra virgin olive oil, sprinkled with sea salt and baked them in the same oven until they were crispy. YUM-E! Also, the next evening, I made these: 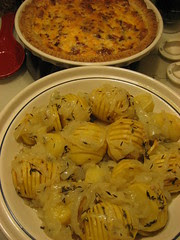 Baker's Potatoes (second recipe on that page) in front, and a tomato pie in the back. We've eaten off of it all for two days :-) The potatoes are very good, however, if you bake them as directed, the tops don't get as tender as the bottoms. Next time, I'll either turn them as they cook, or put them in a deeper dish and cover them in the broth. Otherwise, very good. The tomato pie? Well, let's just say I have cash offers to make these for my hubby's coworkers, that's how tasty it is :-) (it's best when it's served cold)

Next bout of insomnia, I'm making DOGGIE BISCUITS!! Pugs will probably be all over that one ;-)
51 comments: Links to this post

It's back from the framers! That was fast! They actually got it done in one week, it just took me another week to get back over there and get it... 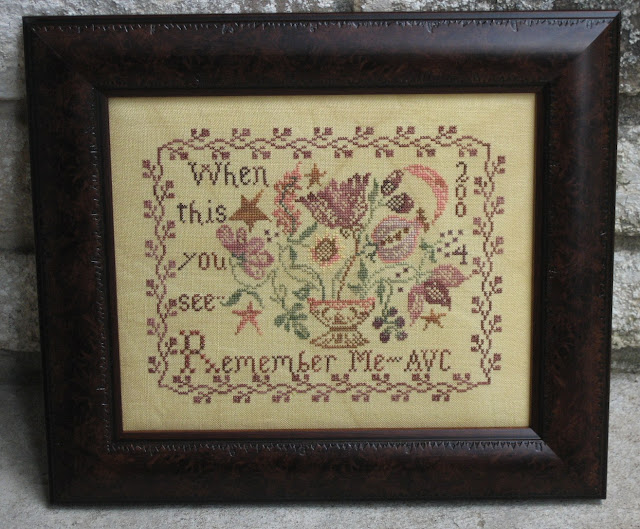 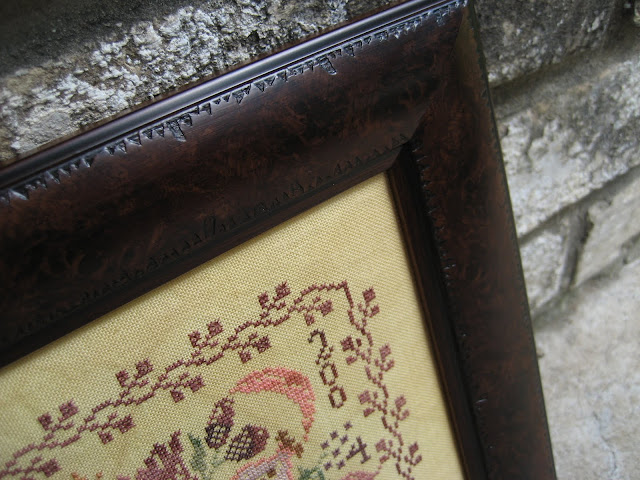 Blackbird Designs Remember Me, from the Tokens of Friendship book.
Stitched on 40 ct. Autumn Gold with called for threads.

Wanted to share my mother's day cake with y'all, it was from Janie's Cakes.... 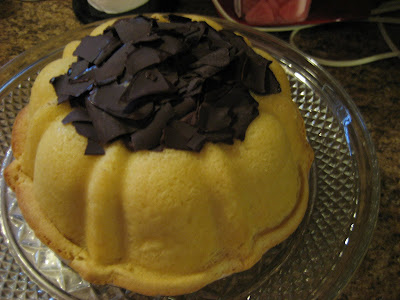 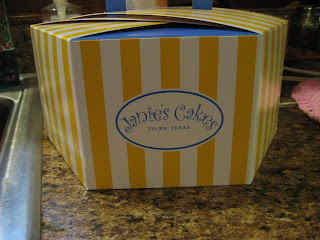 A sweet friend of mine got me the lemon one for my 40th birthday a few years back...it was SO delicious. Well, I hadn't had one since then, but when my friend Patti and I were in Central Market the week before Mother's Day, we rounded the corner and saw these sitting on a table...I'm pretty sure I squealed like a little girl because you just don't see these in stores! They are very good, and have been reviewed in Country Living Magazine and others. Patti got the lemon one for her family and I ended up getting this one for mine, it's called "The Saucy Jane", for chocolate lovers, it was wonderful! It said on the Janie's website that the cakes would only be at Central Market through Mother's Day weekend, but Patti and I were there again today, and they still have them. I'm telling you all this because if you live close to a CM, you should go and get you one, they are totally worth it. I didn't get another one today, and now I'm kind of regretting it! The shipping costs on these are pretty high, and obviously you don't pay that at CM :-)

Thanks for visiting! Have a great weekend :-)
27 comments: Links to this post

Another Sarah, this one from Carriage House Samplings 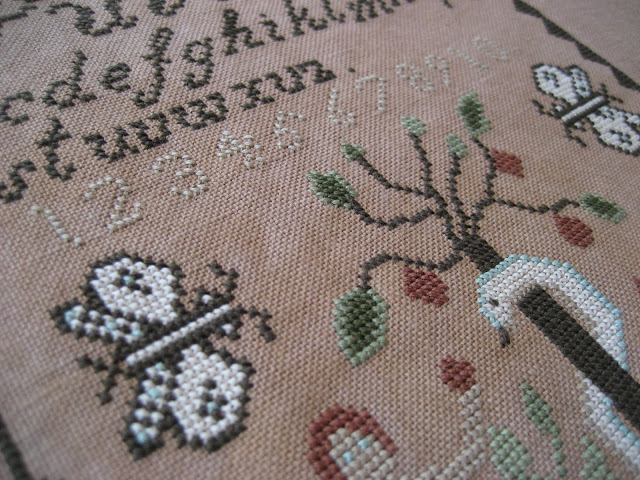 Stitched on 32 count Picture This Plus Ale... 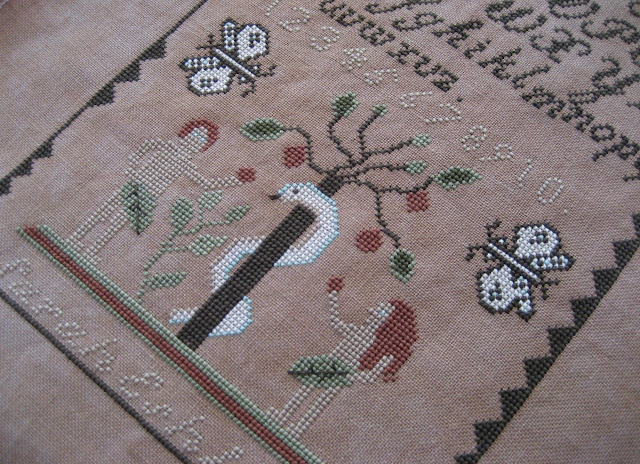 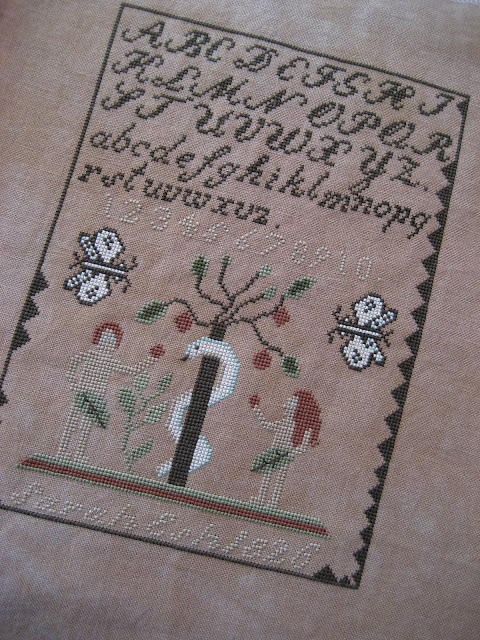 a most enjoyable stitch! 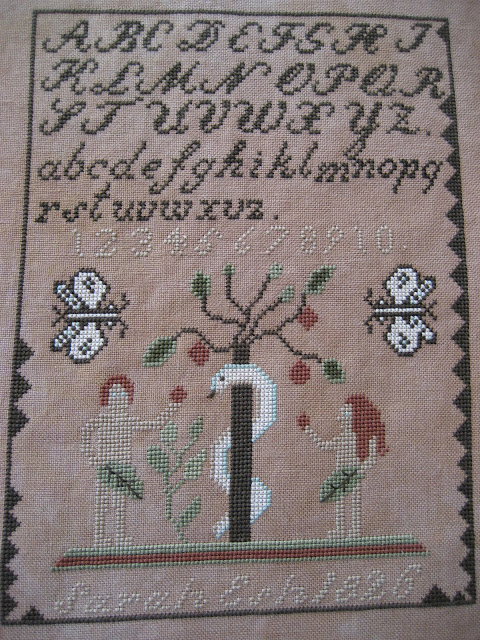 It's starting to warm up here. Another good reason to not do housework! Yesterday I vacuumed and swept the whole house in the morning, and was drenched in sweat perspiration by the time it was done. (I wanted to say drenched in sweat, but my Mama always said "Ladies don't sweat, they perspire", so there. ;-) )
Anyway, next time I vacuum I may end up with just a leaf covering me, like Eve!

And yeah, not in the mood to cook either, perspiring over a hot stove is just not my thing! The crockpot comes in handy in the summer, don't you think? Although...it can warm the house up too. At least our house, which is not that big. I am thinking of putting it (the crockpot) out in the sun room and letting it do it's thing out there, we keep the door to that room closed off when it's too hot, or too cold, unless we're sitting out there.
Anyway, here's a good crockpot recipe for you, Shredded Beef for Burritos.

We just tried it last week and it was DELICIOUS! And if you have leftovers, they are even better! We got some freshly made tortillas from Central Market, the butter kind and the southwest kind, which are a little bit spicy, put the meat and some cheese inside and rolled them up. YUM!!
PS. I used the Kroger brand taco sauce, the hot one, 10 oz. It was cheaper than the Ortega brand (which had 8 oz in it) and it turned out perfectly!

Thanks for visiting my blog! I noticed on my stat counter that I'm almost at 70,000 hits, which is BIG for little ol' me ;-) My friend Patti and I were are our LNS last week, Needlework Boutique (which is a dream to shop at, they have everything!) and ran into some sweet ladies who had just read my blog and seen the  BBD piece I'd posted, which was laying there on the table.

an oldie and a winner

First things first, the winner of the Mary's Best Handework chart is Alice from France! Alice, I'll be emailing you soon for your mailing address!

Here's the oldie I was referring to in the title: 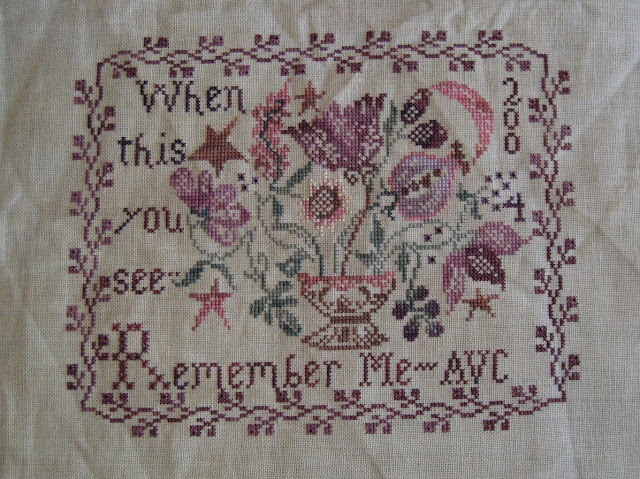 The design is from Blackbird Designs, but I can't really recall which book it's from. Maybe Summer Souvenir? **edited to add - the design is from the Tokens of Friendship book** It was stitched on 40 ct. Autumn Gold from R&R, with one strand overdyed threads, whatever it called for :-) The fabric is much darker in person than what's showing here.
Someone (can't remember who, sorry), had posted a picture of this design on their blog and it made me remember that I had stitched it! Knew it was in the finished pile, not yet framed, so I went digging for it. Can hardly believe it's been 6 years since I stitched it! Goodness! So it will be headed to the framers this weekend, about time, don't-cha-think? That finished pile really needs some working on, that much is true :-)

Have a great week y'all!
22 comments: Links to this post