How's this for an old WIP? I should probably be really embarrassed that the date on this is 2002, which is when it was started and then promptly shoved aside due to my boredom with the same color (like it wasn't obvious to begin with, but oh well, I am nothing if not optimistic *snort*), but here it is anyway, lol.

Blackbird Designs Home of the Brave, stitched on 30 ct. Apple Brown Bindy with DMC 221 (2 over 2), finished a mere 5 years after it was begun:

Also finished this week, Ewe & Ewe & Friends Heart in the Garden, another long time WIP...don't ask me why. It was a fun stitch although I am so over Glenshee it's not even funny (at some point around the year 2000 I'd instructed my family to bury me in it but like I say, over it). Stitched on said Glenshee with Anchor threads: 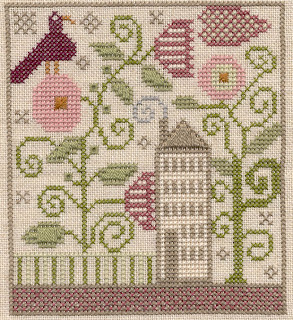 And a recent WIP, only took one month to do as I fit in the two finishes above while it was being worked on, BBD Awake the Dawning Day:

This one was so enjoyable I almost hated for the stitching on it to end. Except for all of those eyelets. that is. Those took me a whole day and when they were over, let's just say it was a GOOD thing.

Thanks for checking out my recent finishes. Hope you are having a great week so far!

They all look fabulous. You have so many wonderful finishes. What's next in your stitching basket?

Andrea they are all SO beautiful! Congratulations on all your finishes. Your Awake the Dawning Day is amazing. I just started this one!

Wow, your finishes are great. So many, I haven't finished anything in ages ;)

They're all beautiful, Andrea, and all in my stitching basket to be done. YGG!!

Great finishes, Andrea! congrats on working up your old wips. I am stitching AtDD with Nancy and have acutally just spent the last hour frogging the left hand vine... grrr. So your lovely finish is quite inspiring. :)

congratulations on all your finishes! they all look great! isn't it a good feeling to start to clean out the UFO basket?

Wow lots of finishes. Great stitching and they are wonderful pieces.

I did Home of the Brave a couple years ago with Jean's changes (owner of The Attic). Yours looks great, also love your EEF and other BBD finish. You are fast!

Andrea, congrats on your lovely finishes! I couldn't agree with you more about the glenshee! :)