Hubby and I drove down to Terrell on Sunday to visit Ham Orchards, which has been there for a long time, but was just recently featured on the news. 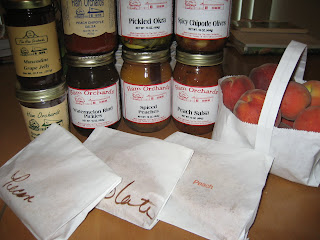 OMG, talk about packed. With people that is! That news feature had to be the best thing that ever happened to them! Which is a good thing(for them) but Jeff thought it was a little "not so much". We made it home with some fried pies and peaches and canned things...
I really don't like to say negative things about people or places,(publicly anyway) so the good thing I can and will say is that he loves their pickled okra and the spicy olives and we still have a few jars of stuff to get into. I have a coworker that lives down the road from them, so whenever this stuff runs out, I'll just get her to pick it up for me and save the gasoline :)
(ps. the peaches were effin' fantastic after they were allowed to ripen in a paper bag for a few days).


On the stitching front, not much to report, working on that "for hire" piece (it's coming right along!) and a gift for someone, so I can't show that here.
I do think ahead though. I saw this pattern on ebay last week: 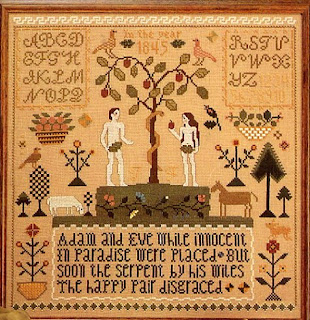 This design is from The City Stitcher, and I don't recall the name of the pattern. Couldn't make up my mind about it and the auction ended without me bidding. Now, of course, I have to have it and can't find it.

Then this one popped up in my search for A&E samplers: 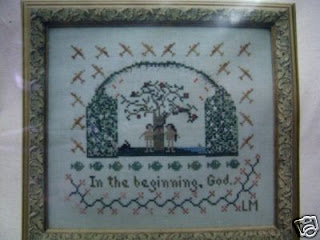 It's a La D Da design. Almost bid but then thought, hmm, that's awfully familiar...
checked the stash, yep, have it!

So much to stitch, so little time!

Enjoy those peaches Andrea! It's almost prime time for them here in South Carolina, and oh are they wonderful!

Have fun stitching! What would the days be like without it?

Yummm!!! I love to go to orchards! Most likely we will be canning quite a bit of jams and jellies this year along with our canned fruit! Good to visit with you again! :)

Good luck finding the pattern for the A&E sampler. I agree, you must have it!

Gotta love that A&E. I like a lot of The City Stitcher Designs, are they still designing? Those of you with fresh peaches available are so lucky!! We've got apples in the fall, but no peaches. Peaches from the store are not nearly as good as fresh ones. Kim

Andrea! I love that Adam and Eve sampler. It's great. Sorry you didn't win the auction.

Fresh peaches are the best and pickled okra I haven't had that in years. My mamaw used do pickled okra just for me. Don't even get me started on fried pies. I haven't had fresh fried fruit pies(say that three times fast, LOL) in ages. Sounds so good.