A little more progress on my Sail Away SAL piece.... 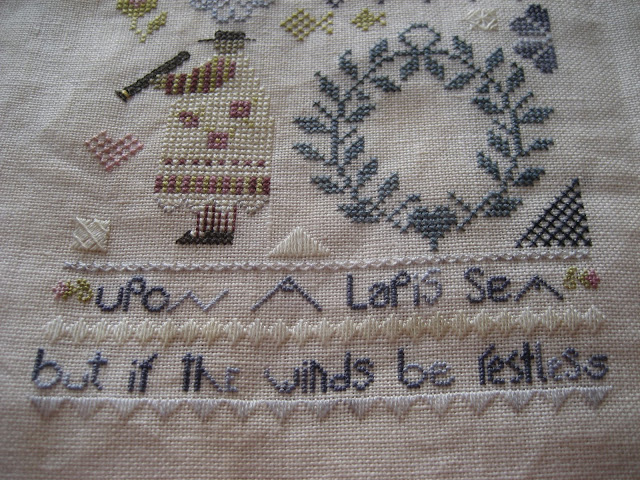 still need to put some initials and the heart charm in that flower wreath, but will save that for last.

Also finished up my Finch Song.... 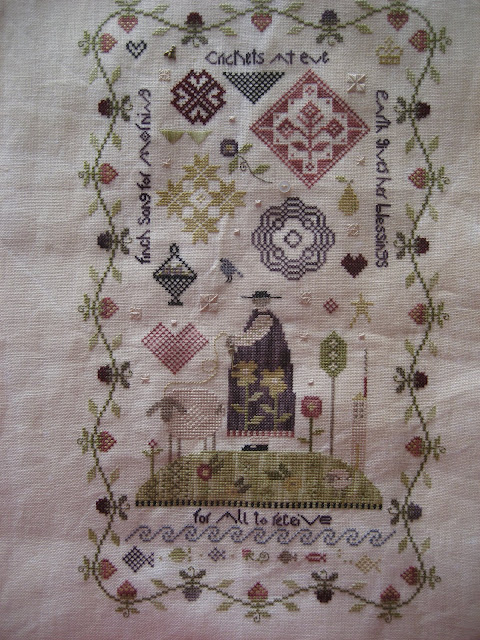 which was a joy to stitch! 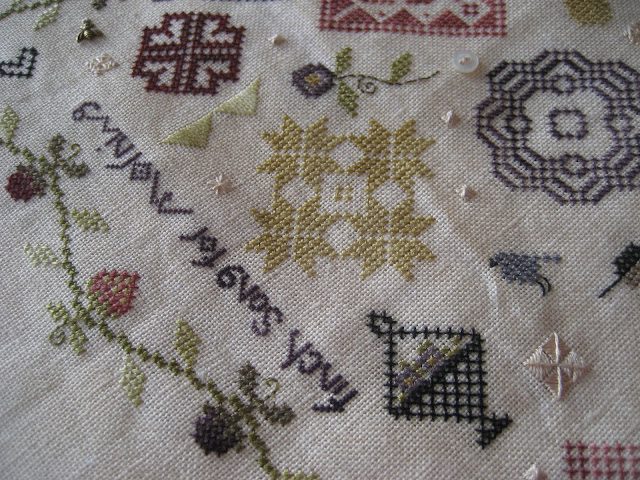 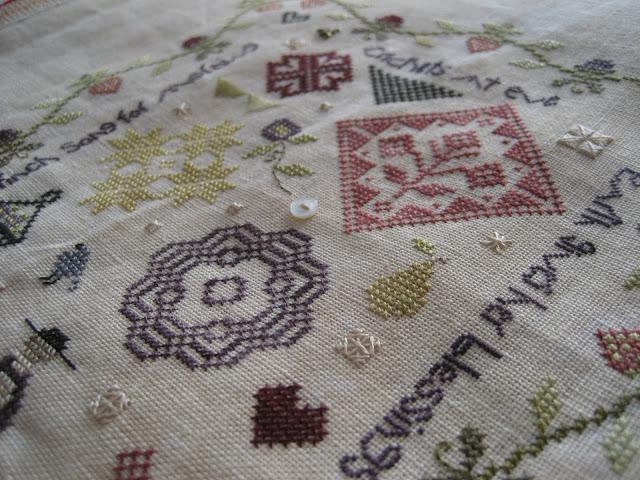 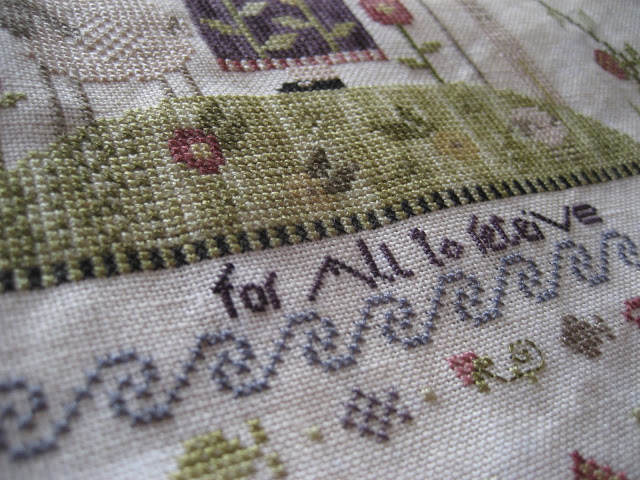 On a non-stitchy note, we had a little, well, big actually, health scare with my hubby, but after visiting the cardiologist and then the family physician today, we got news that it wasn't anything serious. Still have some blood work results to look at, but so far, so good! Hubby's health is always an issue around here, guess when you have heart problems, that's to be expected, but sometimes even small things get magnified out of fear it could be something serious. At least now he goes in when I force the subject. Back in the 80's when he was sick with his thyroid (to the point of being hospitalized), I'd told him then, for months before the hospital trip, that something was seriously wrong. I just knew it! He wouldn't go. Turns out he had Graves disease, with all sorts of complications, you can't imagine. Then again in '97 when he had the heart attack, he didn't listen again and wouldn't go to the doctor, kept saying it was just indigestion, etc. Didn't go until three days later! The serious damage from that one he lives with EVERY DAY! But, ever since then, when I say "you're going", he doesn't argue! MEN! Gosh, it takes soooooo long to train them!

Love the Finch song, you did a great job. You are so far ahead of me with Sail Away but the journey is the fun part. I am working on it now trying to catch up. Marjo

Your Finch song is lovely - congrats. Also - glad to hear your DH will be OK. It's tough on the partner when a spouse's health is not good - so try to also take care of yourself!

Andrea, I so love Finch Song, and I have a feeling it will be the next SB, at least kit, that I will stitch. Yours is so lovely, wow!

Your Sail Away progress is amazing too, congrats!

Glad your hubby is finally listening to you, and that the scare wasn't anything bad!

Beautiful Finch song! I am going to have to look at their patterns a little more closely!

In our fam I am the one with the health problems so I know how he feels, I absolutely hate going. The long waiting...the anxiety. I'd rather rest at home. I was in the hospital over a week ago and didn't sleep for three days...they keep bothering you!

So glad to hear he's alright.

Both pieces are beautiful! So glad your husband is ok. You're right -- they always say they're ok when they're not. My husband is the same way. I have thyroid problems -- one doctor said it was Graves, but I'm not sure about that. Hope your husband continues ok! Tell him to keep being good and listen to you! :D

I hope your DH continues to stay well. Scary stuff!

I love your Finch Song and your progress on Sail Away looks wonderful!

What is it with men anyway. Their stubborn as mules - won't do what they're suppose - but if they get sick they can be quite the babies!!

And I didn't know that you can train them - do you have a manual??? LOL

Both of your Shepherd Bush pieces are gorgeous Andrea!

Glad to hear your husband is OK. Must be a scary situation. After 24 years I've given up even trying to train!

Oh Man...you are sailing along - FABULOUSLY! I have this in my stash...haven't even cracked it open yet....ho hum!
It's beautiful! Congratulations!

Great progress on SA and your FS is absolutely gorgeous!!! Beautiful pics and beautiful photos as well!

I know what you mean about things getting magnified - it's scary! I am glad your DH has you to guide him and that he listens.

Andrea, the SB stitchings are beautiful! I love both but maybe Finch Song a little bit more!

Glad to hear your DH's problems are 'manageable' and managed by you! ;-)

What a great finish and WIP! I love both pieces :) SB patterns are very lovely!

Hi Andrea,
As always your stitchwork is superb. I do hope your hubby continues to listen to you. Hugs and blessings, Sandy

You are going to have a super Shepherd's bush wall!!! I am really sorry to hear you have had such anxiety about your husband's health. I hope the bloodworks is good that you don't have anymore worries for now. Obviously his health will always be an issue but for now you have won this round.
Hugs
Alice

Oh why is it men can be such a PITA sometimes? Thank goodness your hubby has finally found it best not to argue with you about going to the doctor. I hope the test results are o.k.

Finch song is fantastic and Sailing Away is coming along beautifully. Yes indeed you have the makings of a wonderful SB wall.

OMG, I so hear you on your DH. Around here, I'm the one with all the health issues, but I never refuse to go. I'm pretty proactive about my health actually! DH just puts stuff off...like men do, lol. Your SB piece is just beautiful-what gorgeous stitching and colors. Awesome job!

Andrea, wow!!! Your Finch Song is BEAUTIFUL!! Will you get the mats for it or frame it as is? With the border, I wouldn't think you'd need a mat, but then SB has such fabulous mats, so...?! Your Sail Away is coming along so nicely, too. YGG!

I'm so glad that the health scare wasn't as bad as you'd initially thought. I am sure you must be super stressed all the same. Hang in there, gf. One of the characters in a book I recently read said, "If you ignore the elephant in the room long enough, eventually it's going to take a crap.". I know, crass, but it is true! I am glad that your husband listens to you now. Big hugs.

Your Finch Song is gorgeous - I am just loving these new SB pieces!! And your Sail Away piece is coming along beautifully as well. I may need to stitch that one, and I like your idea of the cool ocean breeze! Sorry to hear about the health scare with hubby. I know just what you mean, something small can turn into something really big really quick. Those darn men and their stubbornness!!

I totally understand about always being afraid of it being something serious with your dear hubby as it is the same way around here. So glad to hear that all is well and nothing serious is going on right now! Your stitching is looking amazing!! Gorgeous progress and finish!!

Andrea, I followed you here from MGCC blog. Your blog is lovely! I'm sorry about your hubby's health issues! hopefully since he has learned to listen to you, he may be healthier!! smile...

I'm sorry your eggs didn't peal so well. A couple of thoughts... If your eggs were really fresh you need to soak them longer in cold water...(but not too long or you get a dark edge around the yolk) .maybe your tap water isn't very cold? try adding some ice. And also when you start peeling make sure you get under the membrane. Try this trick again ... It has worked every time for me for decades.
Please let me know how you make out!

Beautifule stitching! Sb is such fun to stitch and always beautiful colors! Glad to hear your DH is okay.

Gorgeous stitching! Congrats on your finish. I am glad to hear that thus far it's not too serious for your dear husband!

Andrea, thanks so much for visiting my blog.

Finch Song is just wonderful - you do beautfiul work. I have had such fun checking in on everyone's Sail Away progress - what a fun SAL to be part of.

Your husband sounds just like mine. My husband refuses to go to the doctor and it drives me crazy - mostly because I love him and worry about him. He recently broke a toe or a bone in his foot (he's not sure which) and won't go to the dr. - he just bought a boot and some wrap and doctored himself right up - I'm shaking my head as I type this at his stubbornness.

I hope your husband is feeling much better now.