..2010! I just love saying it, "twenty-ten". Don't know about anyone else, but I'm so over the "two-thousand and's"! GOODBYE! And as my sometimes crass hubby says (not to me of course) "and don't let the door hit ya where the Good Lord split ya"! Sorry. He's got a million of those, trust me!

Anyway. So Happy New Year! I'm a little late posting that cause things have been pretty crazy around here. That and I'm lazy tired. Since I always end up working on holidays (including Christmas Day and New Year's Day,) along with doing everything else to get ready for said holidays, by the time others go back to work, I'm about to need a nap. A week long one. But we had a good time, everyone got what they wanted and ate like pugs pigs and now the cabinets have been cleaned of all the sweets and treats and we're going to try and eat right for a while.

these piggies Puggies just want to know where all the ham went... 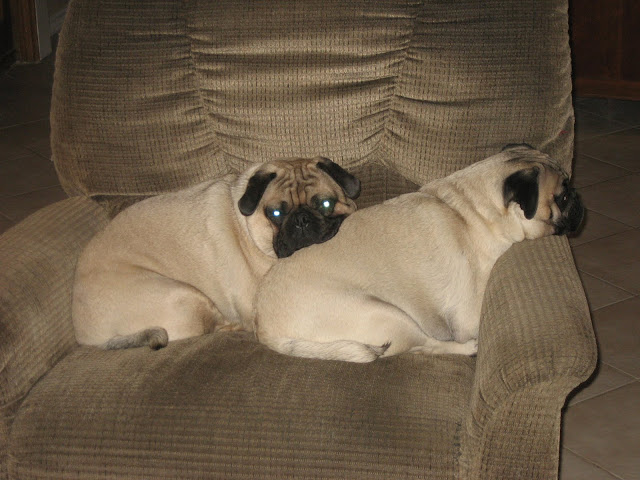 I have no real plan for my stitching in TWENTY TEN (squeeee!!) except to stitch as many tombstone samplers as I can get my hands on. I finished this one in December, but didn't want to post it then as everyone was in the Christmas spirit and all... 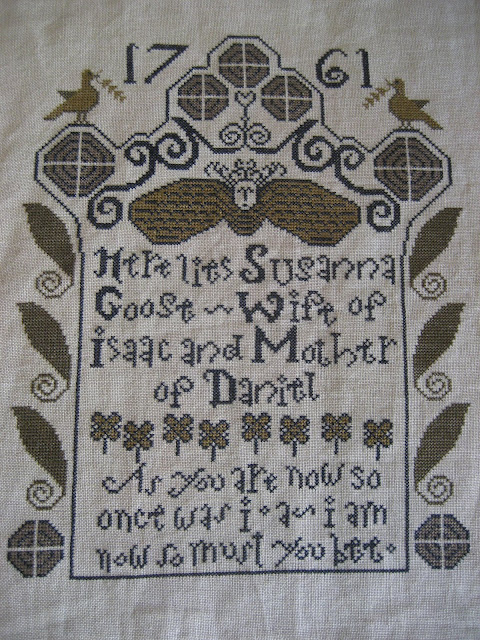 this is Tombstone Angel by Carriage House Samplings 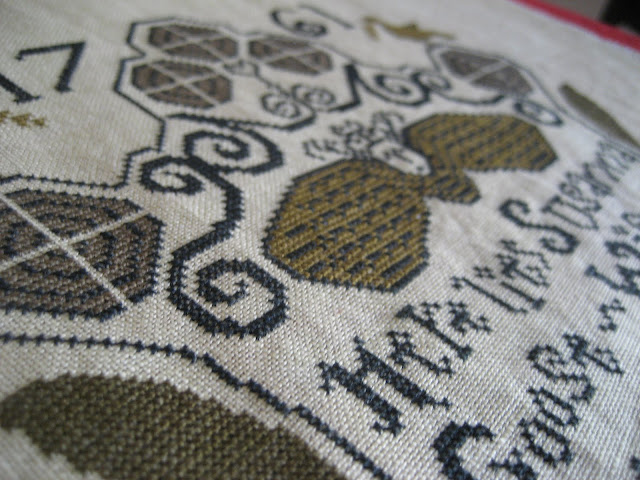 the design was in the October 2008 issue of Just Cross Stitch Magazine. I stitched it on 36 ct. Pear from Lakeside with NPI silks, one over two. A very enjoyable stitch! 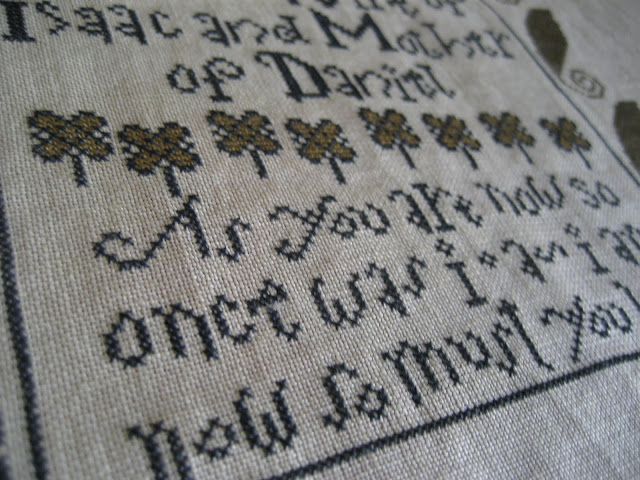 Now, you may remember, I have a slight obsession with morbid stuff. I know there are others out there that share this love of tombstone samplers. I've gotten my hands on a few of them, thanks to ebay and Kathy Barricks etsy shop, but still can't find
these four: Abigal Adams, Prudence Blackstone, Patience Ivy or Sister Spirit. I asked Kathy about them and she said they are from the Chartmakers line of designs, (a collaboration she did with Anne from The Good Huswife) which are all out of print, and those were Anne's designs, not Kathy's and they are not available for sale. Yet. Anyway, if anyone has any of these and would like to trade or sell, please let me know! I have several of the other tombie samplers I could trade for. Other stuff too. I could also beg. Oh wait, already doing that, lol!

anyhoo....that's about all the stitchy stuff I have going on right now.
Now, for something completely unrelated, check out this thing growing on Astro's face. 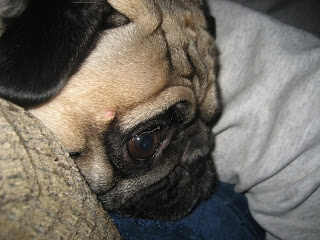 If you click on the pic you will see it more clearly, to the left of his eye there (and please excuse the eye booger on his lashes, I didn't see it when I zoomed in for the pic). This thing just popped up and grew that big in a matter of weeks. Obviously, he's going in to his Dr. Jan (what he calls his vet), but seriously...it's very worrisome for his mother....what do y'all think? I'll let you know what the doctor says!

Thanks for visiting and I hope y'all have a great week!

Oh Andrea, what a great post. I had a good chuckle or two! The tombstone angel looks great. I do not have any of these else I would help you out. I'm sure someone will come through for you!

Sorry to hear you had to work through the holidays. Now I hope you can get caught up in some sleep (?). The pugs look like they have the post holidays blues? ;-)

ps Pkg is on its way to you!

I have no idea where to get the charts besides eBay, which is my go-to for out of print stuff, but as a fellow lover of things morbid I have to say that tombie looks great!

Your Tombstone Angel is gorgeous! One sampler I want to stitch this year is Tombstone Spots. Guess I have a morbid side too!

Your pugs are so sweet. Hope everything goes good with Astro.

Poor Astro, I have no idea, it almost reminds me of a sty?

Love your finish, I am looking forward to all the tombstone finishes :-).

Love the snaps of the Pugs! I have no idea what's happening with Astro... but I'm sure you're vet will have an answer for you.
Love the tombstone finish.

Looks like a cyst. (2 surgeries on Apple for same thing.)
If they stayed like a bump I wouldn't have cared, well except for the one on her foot that kept her from walking but anyway... they would bleed and puss. Which is a sign they were growing.
I'm interested in what your vet says.
Let me know!

Ugh, I am always tired! Must go to sleep at a decent time.

The pugs look so cute...they kind of have that full after a huge holiday meal look about them. Maybe that's where all the ham went?

Yay, 20-10. I started saying this before the new year came and everyone would look at me weird! I'm glad it got voted as the grammatically correct way of saying the year.

that bump on your pups face appears to be a cyst which can probably be sorted out without much difficulty. Pets are such a worry when there is something wrong with them aren't they, because you just can't explain to them what is happening.
I adore your tombstone finish - if you would like to sell (or lend) the chart please let me know x

Love your tombstone finish! I have a big thing for these designs ATM too, despite the morbidity ;) Hope Astro is OK and it's nothing serious.

Beautiful finish! I love it. I'll have to write down that you used Pear for it, so I can, as always, copy you! ;) Good luck finding the charts... I borrowed my Patience Ivy from a friend and don't have the rest. I hope your pup is okay, fingers crossed and prayers being said. I know my friend Pam's dog had a cyst on his face, she said that her vet said it's just a normal growth that dogs sometimes get. ?! I hope it's the same 'oh, it's nothing' for your pup.

BTW, i'm enjoy cross stitch, though i'm not as good as you are!

Your posts always make me laugh! I love your finish and the fabric is wonderful. I am not into the morbid so I can't help with your patterns - but good luck in finding them.

Poor puppy - you'll have to update us on what the doc says!

Concerning the Tombstone Angels, you know I am a real Tombie and just love all those "morbid" designs. Hee, hee I think maybe we can make a deal for a couple of the designs........gotta do a bit of digging through stash to make sure.

Awesome post---your tombstone sampler is FABU !! I should have collected ALL those charts when I could have. I'm all for morbidity. We are sisters of the heart I swear!

I love your stitched piece and all its morbidity. Great finish!
Wishing you a Happy New Year and that you can get hold of the OOP charts.

Did you find out about Astro? Hope all is okay.

Love the tombie finish - I love tombstones as well. I don't think I have the ones you're looking for but I'll check when I get home from work.

Happy 2010 to you too! I love the tombie finish and look forward to seeing more. I will keep an eye out for the tombies you are looking for. Hopefully the vet will tell you it is nothing serious. I always enjoy visiting your blog.

Your tombie is fabulous! I've been meaning to stitch this one up. Soon, I think!! Hope the cyst is no big deal...Othello had one on the back of his neck several years ago...it was big enough they had to remove it, but otherwise not a problem. Happy New Year!!