"I love fall!
Fall is exciting.
It's apples and cider.
It's an airborne spider.
It's pumpkins in bins.
It's burrs on dog's chins.
It's wind blowing leaves.
It's chilly red knees.
It's nuts on the ground.
It's a crisp dry sound.
It's green leaves turning.
And the smell of them burning.
It's clouds in the sky.
It's fall.
That's why...
I love fall."~Author Unknown

I'd like to share with you my Blackbird Designs Autumn Song box. It was finished earlier this year, but it didn't seem the right time to share it then... 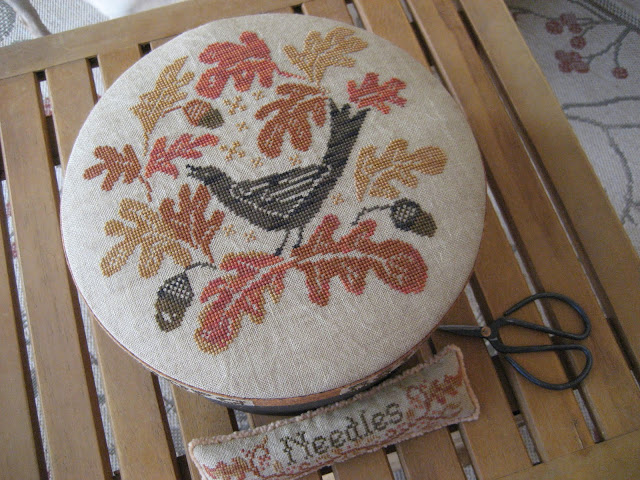 I had some help finishing it. Meaning, I tried to do it, messed it up, and ended up sending it to a friend for finishing ;) 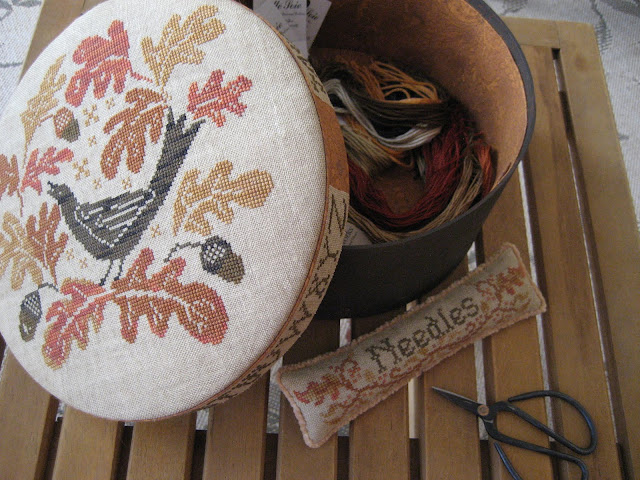 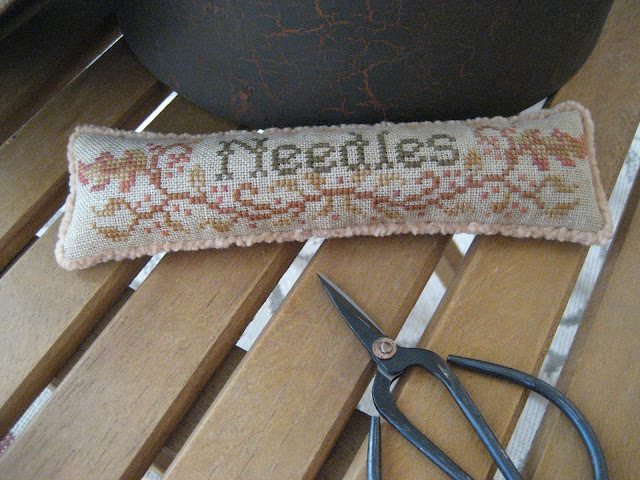 Fall stitching is really my favorite :)

Here's my current WIP, Good Huswife's Hooked Rabbit Pincushion...which is a gift for a friend for Christmas. It's being stitched on 36 ct Vintage Pearled Barley with two strands WDW. Lots of solid stitching! 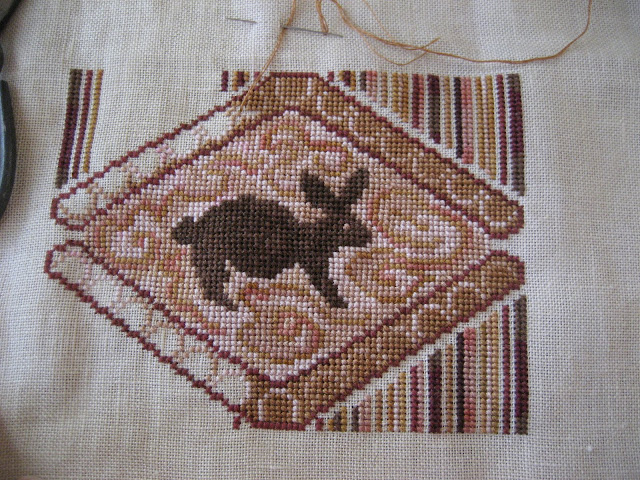 Muttley Pie got his stitches out Tuesday! And the ulcer is healed! Yippee!! He's got a little scar there now (you can make it out if you look closely, the right eye), but he's on medication to minimize that. The other eye is still a bit inflamed and gunky, but all in all, he's doing better.... 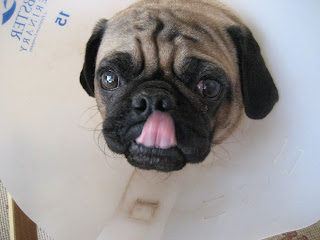 He has to wear the cone for two more weeks though! I'm beginning to think he won't know how to act when it's finally off. He gets around with it like a pro now!
We'd like to say thank you for all of your good thoughts and prayers...I've shed a lot of tears of worry over this pug while all this was going on. A sweet friend on Facebook reminded me to just have faith that it would all be ok...it was a reminder I really needed....sometimes (well, most times), I have a tendency to expect the worse...so when/if it happens, I'm prepared to deal with it. Turns out...it takes about the same amount of energy (maybe even less!) to think positively as it does to worry about the worst case scenario! Who would've thought it ;-)

Love your Box and pincushion. They came out beautiful. Fall colors are the best.

I'm glad your pup is doing better. You are probably right that he won't know what to do when that cone finally comes off! He will be one happy pup:)))

I am SO glad that Muttley is doing better. I tend to worry over the worst case scenario, too--I know how that goes!! I'm so glad that all worked out in this case. :)

LOVE your BBD box and pin cushion! Great WIP, too. I love the colors in it.

And, oh. my. gosh. I LOVE your fall box and pincushion! It's gorgeous! And the bunny piece is darling. I really like the warm colors and the stripes.

GF...the box is lovely :) Your stitching is gorgeous :)
WOW!! I have this in my pile of to-do stitches and already have the box for it ready to use as well :)

Good news about your Muttley :) :)

Do you happen by chance to still have the GH All Hallows Eve? I would love to stitch this one :)

Have a great weekend my friend!
((hugs))

Love the Hooked Rabbit Pincushion! A.LOT. Can't wait to see more of it.

Your BBD box is fabulous Andrea! I have this one stitched and really love it, it's one of my favourite of their designs - you did a great job!

So glad Muttley is doing better :)

Oh wow! I love your fall stitching! The BBD box and pin cushion are just wonderful! As is your current WIP. I'm so glad Mutley is all better. Poor thing with the cone though. That's so funny that he's so used to it now!

I'm so glad Muttley is feeling better. Less worry now for you guys!

Love all the stitching! (But then, I say that about all your stitching!)

Have a great weekend, Andrea!

I love autumn song. It is beautifully finished. I have this in my stash, now it is calling out to me since I saw this fabulous finish.

Glad your pup is much better now.
Beautiful autumn finishes and your wip is gorgeous.

What a lovely BBD box. I have that design in my stash, but I don't think I'd be brave enough to finish it as a box in case I messed it up!

I'm so glad you've listed what your Fall stitches are in the side bar...I was just about to ask what the 2nd left pumpkin is in your header!

I love your fall box. It's very pretty and I would have done the same thing as you and ended up sending it out too. I'm glad Muttley is doing OK now. I can't wait for the report when he gets his cone off.

Love the box and pincushion. Both are gorgeous finishes.

Glad to hear that Muttley is doing well.

I am so glad Muttley is doing better - he is sooo cute!

Andrea, I love your Autumn Song box and pincushion. They are just beautiful. Your bunny is coming along nicely as well.

Mutley is so cute, and I'm so glad he is doing better! Those little animals really capture our hearts, don't they?

Your Autumn finish is just gorgeous, and this is the perfect time to share. Enjoy your weekend!

Wonderful finishes! I am glad that Muttley is doing so much better.

So glad to hear that Muttley is doing much better! Whew!!

Your box and pincushion is lovely! That's on my to-do list too. Ugh, I need to stitch faster! Great progress on the bunny pincushion too!!

Just Me and My Shadow said...

Love your BBD Autumn Song. It is the loveliest design isn't it!! I have done this one too and it is one of my favourites. Love Autumn colours!! Glad you little puppy is doing well. It is just awful when our beloved faithful friends are sick.

Oh wow I LOVE your Autumn Song. It is just gorgeous!

Glad Muttley is doing well. He looks so cute :)

Love autumn song and the new start! They are both so pretty and isn't Deb the best.

So glad Muttley is doing better! What a sweet face he has!

Glad to hear Muttley is feeling more like his old self.

Love your wip and enjoyed seeing all your autumn pieces in your sidebar!

Your box is gorgeous, the pincushion fantastic!! It is perfectly wonderful top to bottom and everywhere in between :)
Thinking good thoughts for your lil' buddy :)

Boy, I know what you mean about expecting the worse...and I do think it's a huge waste of energy. It's something I've had to work hard to overcome and think postive. I have a co-worker who has a t-shirt from him senior year with a quote that says something to the effect: You become what you think most about. When negative thoughts pop into my brain, I try to remember than and think postive. Glad the pug is doing better!!

What a great finish! I received this design finished as a photo book cover in an exchange years ago and it remains one of my all-tiime favorites!

So glad he is doing better and the stitches are out. It's hard not to be distraught and think the worst when these things happen, but a reminder to have faith is a good thing. Big hugs to you!! Love love love your Autumn Box. It's a reminder to me that I need to get mine out and start it. I have all the stuff (even the box!) it just needs stitching.

Tour Autumn Song is fabulous! I love it. I am glad to hear that Muttley is doing better. I know you are relieved.

Congratulations on a stunning finish! I hope you enjoy the box and pincushion for years to come.

Hi Andrea, Just came over to your blog from Deborah's at Cranberry Samplings. I love your autumn box!
You have done beautiful stitching.
All the best to you and Muttley...what a cutie!

Your BBD box is so beautiful, Andrea! I'm sure I would have a difficult time with the finishing, too. You're lucky to have a friend who can help out :)

So glad your little Muttley's ulcer has healed--I'm sure you both can hardly wait for that cone to be removed!

I fall in love again every time I see Autumn Song! Yours is gorgeous! Any interest in a pattern trade? :)

This is just gorgeous Andrea! So sorry I missed this post. You have such fabulous taste in samplers.