There have been some recent and not so recent additions to our home lately, and since I have been so neglectful in my blogging, a few are from last year even! If I don't start somewhere, I'll never catch up, so here goes, the first installment

The most recent one, back from the framer: 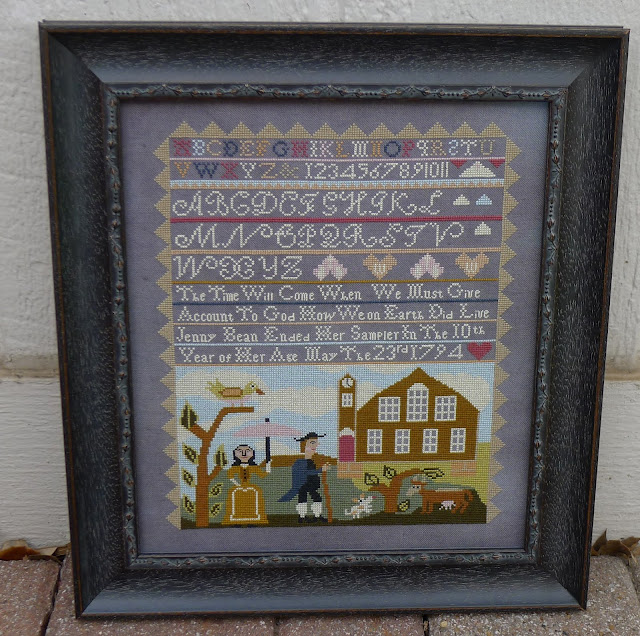 This is my Jenny Bean Sampler that I worked on all last fall and through the holiays... 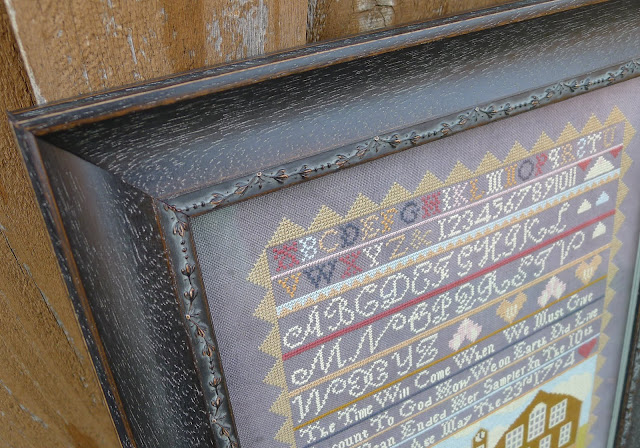 Stitched on 40 count Ink Spot Black, it was a "sun-room" project that I could only stitch on during the day when the light was good, so I kept her out there, and another project in the living room to stitch on in the evenings, when not at work. 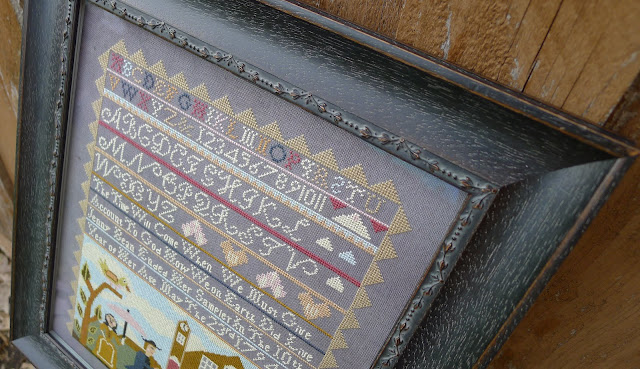 The chart is from The Scarlet Letter and I stitched it with the Au Ver A Soie silks called for. 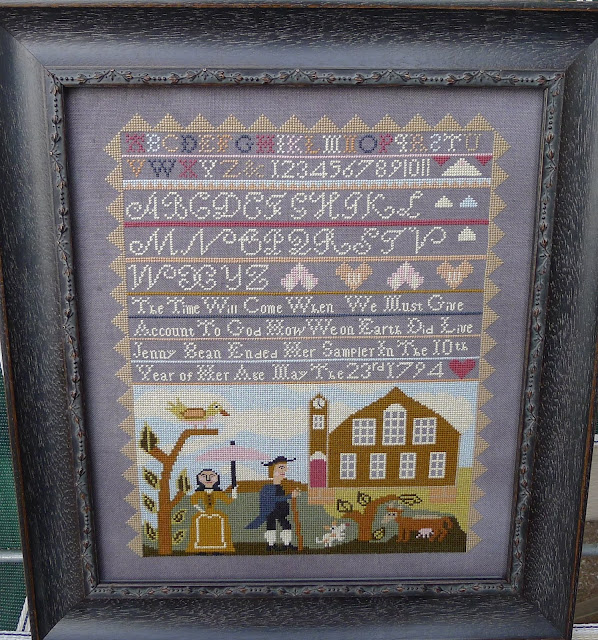 Jenny Bean had been in my stash for a while, but here's what made me pull her out and get stitching last fall: 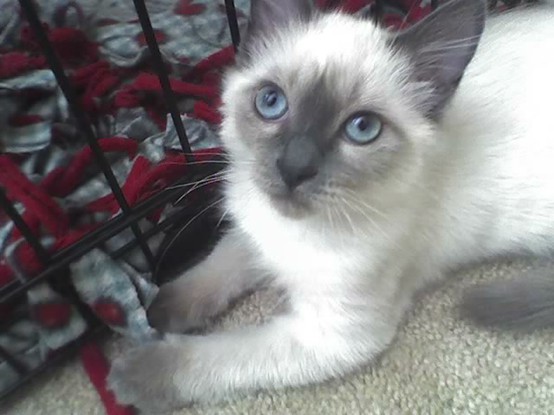 This little kitty came to live with us back in September. My friend had adopted a dog from our local animal shelter, and while I was there with her, I'd spotted some really cute kittens, so I had to go back. My son was wanting another cat to keep his cat company while he was at work during the day, but because she was sick when we first got her, she had to stay at our house, so his cat didn't get sick too. He named her Jenny. Well, long story short, it didn't work out for him, so we got to keep her :) 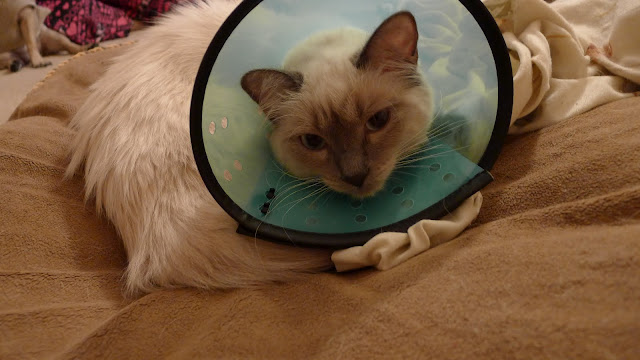 Now, what do you think this kitty gets called? Why Jenny BEAN, naturally! She is much bigger now and filled in some since her spay operation (she was so thin!), but for some reason, I cannot find those photos, so the ones above will have to suffice for now.
Notice the pug lounging in the background in the last picture? As you might guess, this little girl has shown all the boys who is boss.

So there it is, recent and not so recent additions. I will return soon and post more....more framed finishes and yes, another fur-baby addition ;-p
Thanks for visiting my blog!
xoxo

its a very piece, and the frame is beautiful

Love your finish AND the kitty!

Beautiful stitching! The frame sets it off perfectly! Cute kitties too!

Oh my! I love Jenny Bean! I so need to stitch her. Yours is just wonderful! Love the frame too! Is the Ink Spot Black really black or more gray like in the picture??? Love your new little kitty too! Great name! :D

Both Jennys are beautiful! And they are both framed!! 40 count on black can't be easy to work on, and you did a beautiful job.

What a gorgeous sampler! I don't think I've seen this one before, and I love your colors. Great job. The frame is fabulous too!
Your kitty is so darling. What a perfect name.
Welcome back to the blogging scene dear friend!

I had not seen this piece. It is gorgeous. Jenny Bean looks like a sweet kitty.

The framed Jenny Bean is wonderful, so handsome in black!

Your two kitties are both so cute!

Your sampler looks amazing on that Ink linen...the colors just pop! And the kitty is so sweet!

Beautiful stitching. The frame is perfect for it. Jenny Bean is adorable ^.^

Your stitching is really beautiful and the piece framed up perfectly.

Your new kitty is really pretty!

I love both your Jennys :)

Jenny Bean is gorgeous and a must stitch!! Your new kitty is so sweet too. :)

Oh wow, your Jenny Bean is just gorgeous!!!! I love it. And sweet kitty, glad she's fitting in well ;-).

Love, love your Jenny Bean! It's wonderful. I think that the fabric is wonderful for this (was it the called for fabric?). The framing is wonderful too - I think that I've used that frame before - it's one of my favorites! Congratulations!

Great finish! I just love the way the colors "pop" on the dark linen. Nice frame choice too.

Congratulations on your little "jenny bean". What a cutie!

I just love the fabric you chose for this one. It really turned out nice. Love that cute furbaby pic too.

Your piece is beautiful. I love the fabric. The kitten is adorable. Nothing cutter than a kitten...

Wonderful finish, Andrea! I really love it and the pastoral scene at the bottom is just darling (love the cow!). I used this frame for a couple of things; I just love it. It is a perfect compliment to your stitching.

The kitty Jenny Bean is a beautiful cat! She's getting along well with the puggles?

Love every thing about your sampler...fabric, colors and framing! And how adorable is Jenny Bean!!?

Congratulations, Andrea, on your "Jenny"! Your stitching is beautiful, and the colors are so pretty on the Ink Spot Black. I'll have to keep this color in mind for a little project I hope to start soon.

Both Jenny Beans are just gorgeous! I think your Jenny and my Alan might make a cute couple-he's a Himalayan. And, I just love your Jenny Bean sampler, I'd never seen that one "done". I esp love it on the dark fabric!

Gorgeous! I just love this one, and yours turned out beautifully. The framing is perfect for it! And Miss Jenny Bean is too cute!

Andrea your Jenny Bean sampler is just totally beautiful! I have been looking at it but after seeing yours, I am convinced it is one I want to do. It is so neat about your little kitty and she has such a wonderful home with you! You are indeed an inspiration. I hope your family is doing better too! :))

It's a wonderful piece and looks gorgeous on that fabric colour.

Both of your Jenny Beans are beautiful ladies!

Wow, I love your Jenny Bean Sampler ~ so much so that I have started a TO DO LIST on my sidebar with the link to Scarlett Letter site, thanks for providing the link.

Congrats on your recent finishes! The Jenny Bean Sampler is beautiful. I love the fabric you stitched it on.

I have been a lurker on your blog for some time now and have finally started one of my own. OneXataTime@wordpress.com. I would love it if you had a chance to stop by.