Everyone around here is sickly. It started with youngest daughter, moved to son and then to oldest daughter and husband. So far I've escaped but feel it lurking...hard to explain but things are a bit fuzzy and sore and just plain ol' yucky. Just praying it doesn't hit me full force until after work on Tuesday because that's a night that I can't miss. Meanwhile, I've made a few runs to the store for medicines, cough drops and kleenex and made some taco soup for dinner and sprayed Lysol on everything but the peoples and fur-babies. 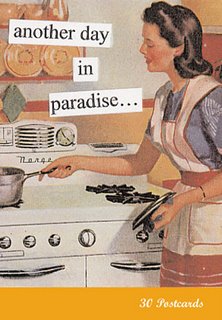 Speaking of furbabies...we're quite possibly getting a new addition on December 5th, a Pug puppy who will be 6 weeks old on that day and ready for adoption. He's got all of his papers and will be quite expensive, at least for us, we've never paid very much for any of our precious pets, at least not at first, in the long run, thousands, of course. Anyway...we've been talking to Scooby and gearing him up for a little brother...so far he's all over the idea. 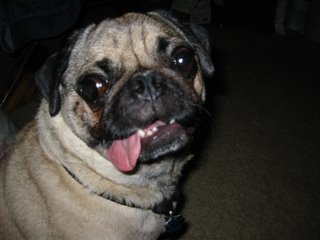 In October we went to the State Fair of Texas. 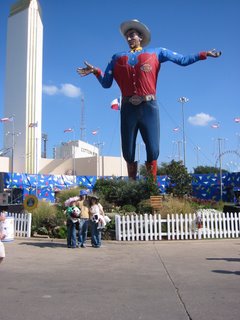 It was 94 degrees that day which is the hottest it's ever been when we've gone before. We passed out fairly often but the times in between were A-OK.

A few highlights for you.

Each year they have a "Butter Sculpture". It is OH so exciting, so much so that it actually makes the local news, the process of carving whatever it is they carve out of the huge chunk of butter. Do they do this in other state fairs or it is just a stupid Texas trick? (We have lots of those here, btw, and they usually always make NATIONAL news, just to show the rest of the world how dumb we all are, but I digress). 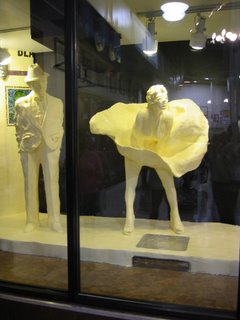 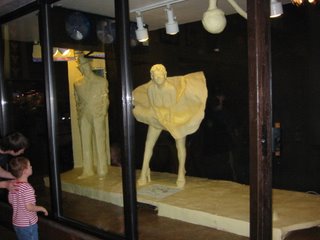 In case you can't make out what it is, it's Marilyn Monroe, naturally. We never could figure out who the guy standing beside her was, guess it was supposed to be her co-star in the movie that the scene is from...can't think of the name of the movie, sorry. Oh, Some Like It Hot? Yeah, that's probably it.

This picture made me smile: 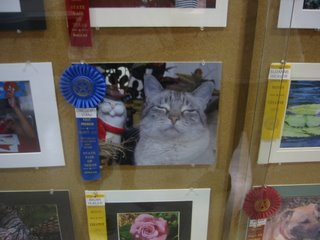 That kitty and his owner deserved that blue ribbon for that pose, don't you think?

Two more that I loved: 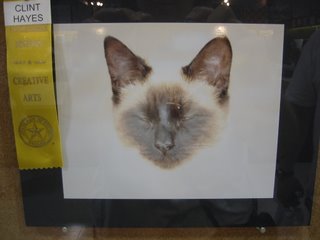 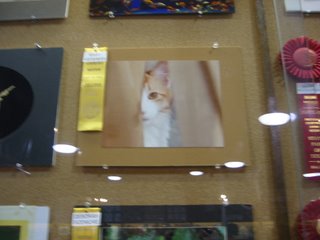 Well, no recent stitching pictures to share...got a new camera and haven't figured it out quite yet. So here's one of something I stitched several years ago. 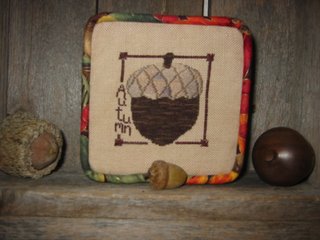 It's a design by Twisted Threads and the whole bottom part is done over one, as is the lettering, and the acorn top is done in satin stitches. It's my husbands favorite fall thing that I bring out each year.

I'll be back soon with more pictures of recent finishing.