Finished this up last week, just in time for Valentine's Day! 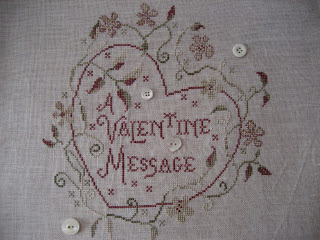 The design is from Blackbird Designs (I just propped the buttons on for now, trying to see if I like them on there or not).... 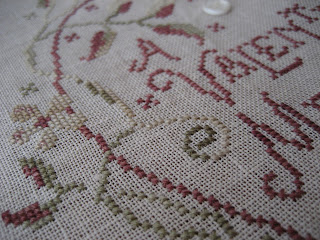 and is called A Valentine Message. I stitched it on the recommended fabric with Gentle Art threads (there were only three). I like how it was finished on the cover of the chart, but have a "stitcher's tray" in mind for mine :)

Our 26th anniversary is on Valentine's Day. It was my hubby's idea to get married on that day! Aww...isn't that romantic? You'd think! BUT. He told me years later that he wanted to pick that day so he'd never forget our anniversary! Smart fella. 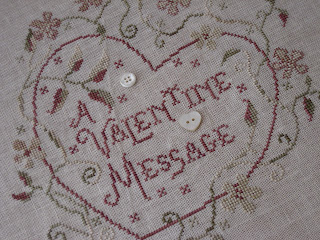 And here's a little something else I made this past weekend and I think we're as in love with it as we are in each other. And that's a LOT. 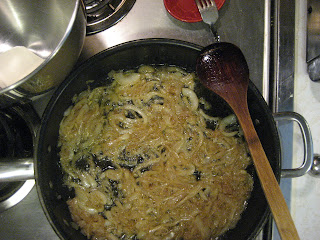 And you can find the recipe for it here: Onion Dip!
(It's from the Ina Garten Barefoot Contessa cookbook and on page 53, but the link is quicker ;) )

After following the recipe exactly, here are my tips:
*Make it the day ahead. It's WAY too sweet if you eat it the same day. Once it sits overnight it takes on a whole 'nuther taste sensation, (one that will make your eyes roll back in your head).
*The sliced onions are good, but next time I make it, I'll chop them coarsely instead.
*I only used 1/4 tsp. black pepper, same amount as the cayenne pepper and thought that was enough.
*It's pretty thick when chilled, so we had it on Wheat Thins.

You must go make it. You won't regret it. You may even love me for sharing it with you ;)

What a breathtaking piece, superb!!

I love your finish! How sweet that Valentine's is your anniversary!!

Thanks for the recipe! And I loved you before you shared it!! lol I can't wait to try it.

Hi Andrea, thanks for the comment on my blog. I like yours, too. Your stitching is amazing and I'm so glad the dog made it through his shots OK. If you like stitching and pugs (and, you obviously do), you must visit this guy: http://www.michaelaaronmcallister.com/STUDIO.htm
That link is to his studio with a pic of the pug, but look at his artwork, too. Amazing!

Wow, it's beautiful!! I have never seen this design before and I love it!! The recipe looks great too! I must try it. Happy early anniversary. That is so sweet!! :)

THat is so funny! My husband had our anniversary put on him in the form of a tatoo so he wouldn't forget! :) That dip looks DIVINE!!! I love onions so that will be something I try for sure!!

Your Valentine Message is gorgeous! The colors are so pretty, and every stitch has been made so perfect! I like the buttons, but then I am a button lover.

Happy Anniversary early, and I think it is very sweet that you were married on that day, even if it is easier to remember!

Oh, and I can just smell those onions cooking. I will definitely try that recipe!

The Valentine Message is lovely... and I vote for the buttons too, adds a little extra special something.

Thank you and Astro for thinking of me on VD. The card brought a smile to my very cold face. It's propped up in the windowsill, over the kitchen sink... so it gets several looks a day.

And I love the Barefoot Contessa too!!! That recipe looks divine.

Love the finish and the buttons are so pretty on it. I am going to save the recipe for the next time I have a potluck.

Your stitching is gorgeous, as usual! The dip looks delicious. I would love to make it, but I would end up eating the whole thing myself. Mike is not a snacker, but I LOVE dip! Once I start I can't stop! Maybe I will make it at Easter to share with my family. Hmmm, maybe I'll make your famous corn dip too :-)

Your stitchery is beautiful. Yor did a great job. I like the button idea. But I love buttons. Blackbird Designs is one of my favorite designers.

I forgot to wish You and Hubby a very Happy Anniversary. And I wish many more to come!

What a beautful finish! Congrats and thanks for that yummy recipe!

What a pretty finish! Love those colors. I do like the buttons :)

Happy Anniversary!! Your stichery is beautiful as always.

Lovely stitching and I really like the buttons. The dip sounds delicious.

OOh, the onion dip sounds yummy! Thanks for sharing. Your Valentine piece is gorgeous too - I like the buttons. Happy Anniversary!

Andrea, I love the Valentine piece! YGG! Love the close up pics, too. The action shots. :) The onion dip--yuuuummmmm. I need to make some!

Andrea, thank you so much for your sweet comment on my blog today! I've been a lurker ere for quite some time ;o)
Hey, that dip looks and sounds great! I might have to try that.

Your BBD piece is stunning. And I do like the buttons...