the one in which Astro almost dies. AGAIN.

Some of my readers may remember last summer, when he went to a new and different vet to get "fixed", he had a bad reaction to the pre-op meds and almost didn't make it. Later that fall, he went back to our "old" vet who didn't use the same meds as the new and, was successfully neutered. He had all of his puppy shots with this vet and never had a problem. Until last Thursday.

He went in for yearly vaccinations. The other Pug, Scooby, went in with us (my two daughters go with me to help) for a dental vaccine booster shot. Astro was so calm and Scooby screamed like a lunatic, his usual routine.
We left the office.
We drove a few miles one way to pick something up. Astro is in front passenger seat with younger daughter, Scooby in back with oldest.
We head back home but then on a whim, stop by the bread store to get rolls and bread.
Girls and pugs wait in running car.
I came out and Astro is splayed out on K's lap, he's vomited and lost control of his bowels and is going into shock. K just thought he was overheated and was trying to clean up the mess, but I knew he'd never done that before, gotten carsick or overheated, so I call the vets office, they say bring him back. Thankfully the bread store is only about 4 minutes from the vet's office.
We race back.
They give him "life saving shot" through an IV.
We go home, we have dinner, including the pugs.
Astro begs, so things are looking pretty normal..... 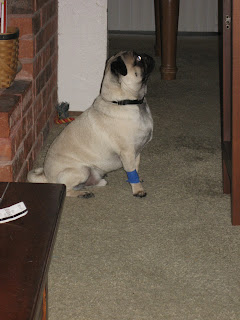 After he eats, he usually cleans his face on the floor, nothing weird there. Until his head pops up and I'm noticing that his face is swelling up. Hmm...

It's closing time at the vets. Call them anyway.
"bring him back, we'll wait".

Stop in middle of dinner.

Rush back to the vet... (and why is it when you're in a hurry to get somewhere, and time is of the essence, that is when the train runs or you get behind a Sunday driver? Every. Single. Time?)

So, the other medicine they'd given him to prevent the hives wasn't working. Give more medicine. Vet says after initial assumption that he'd just had an unusual adverse reaction, she thinks it may have been a bad batch of vaccine, and as we're leaving, we notice other dog waiting with his owner, another bad reaction to vaccinations, so that makes sense.

Come home again. That's when Astro really loses it this time because although the swelling in his face has gone down, it's starting to spread out over his body...

After he raced around the house for about 20 minutes with me trying to calm him down, the medicine finally started kicking in and he started to calm down. He was so tired and stressed out.... 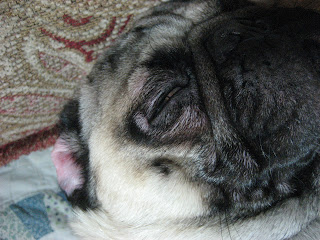 this picture of his face is after most of the swelling had gone down, he had huge blisters on his eyelids at the vets office... 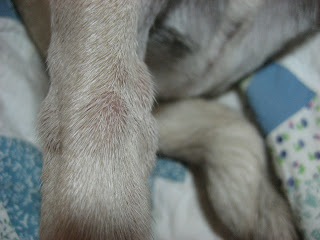 it was now moving through his body, he was swelling up in his private area as well as everywhere else and itching like crazy... 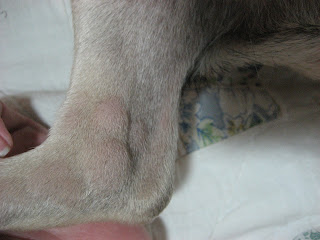 he was red all over and this is after he'd started to get better! 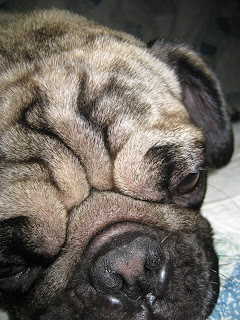 And to top it all off, most of us around here are sick with flu or viral infections, my mother in law is in hospital in E. Texas, and another stitcher's life was cut short too soon, so very sad about that...

Needless to say...no stitching to report. Astro is better...just too stressed out about the whole ordeal to blog about it himself. I could use a little peace around here myself...

Yikes!! Poor Astro! Sorry he (and you) had to go through such an awful experience ;)

Oh your poor puppy, hope he's on the way to recovery with no relapses.

I am so glad he is better.

I am telling you Andrea . . . no more doggy shots for him. He is a sensitive little guy.

I wouldn't even use regular dog shampoo on him either... he needs an organic non scented shampoo.

I hope you are all healthy and get better soon. Being sick sucks. :-( I didn't know about your mother-n-law . . . how bad is she?

Andrea I am so sorry this happened to Astro! I would have been a basket case. One thing I can't stand is to see an animal in pain or discomfort. I hope he feels better soon, and you too! Take care.

My God Andrea! how terrible for Astro. I am glad to hear that he is recovering. I you are too! Take care.

I freaked out when I heard about this last week, and it still gives me chills to think how Astro had such a bad time. Is that a blue badge of courage on Astro's leg? I think you need one too. I hope everyone is feeling better and life can soon be boringly normal.....I think you've had enough excitement.

Yo Astro! Mom told me what happened. Yikes!!! Glad you're feeling better.

Jackie,
my MIL is in the hospital for heart problems...it's an ongoing condition that doesn't get better because she won't change her lifestyle. So frustrating. We didn't go down since we're all sick...to subject her to a virus right now would not be good...

And Mary Lou,
the blue band on Astro's leg is a bandage from where the vet gave him IV meds. He had to keep it on for a couple of hours after the first trip back but got to take it off after the third visit :)

(((Andrea))), what an ordeal! Hope you are ALL feeling better now and wishing you a "little piece of quiet."

Oh Andrea, I'm so sorry you've had to deal with all of this. How stressful. I'm praying for you!!

Oh my gosh! Poor Astro!! And poor you for dealing with something so scary...

Thank you Jackie, it it weren't for you I couldn't have done it!

OH poor thing! That just sounds awful! At least he is ok now! How scary! I know that I would be a mess if my poor pup had similar problems!!!

Oh, what a frightening ordeal! I'm glad Astro came through. We had a Dalmation that had an allergic reaction to something that bit her. We had just moved, had no phone hooked up yet, and had to drive to a pay phone and look up where we could find a vet. Thankfully, the phone booth still had it's book! By the time we got to the vet her throat was closing up, but the meds worked quickly. OK, enough of my saga. I hope you don't have anymore! And thank you for dropping by my blog today!

Andrea, I LOVE your blog's new look...and thanks so much for including a link to MINE <3

I hope Astro has fully recovered and his mom has had time to de-stress from the whole ordeal.

Poor Astro, what an ordeal, glad he is getting better. I'll be thinking of you.

Poor thing! And how scary! I hope he's on the mend (and so are all of you!). On another note, I'd be happy to share my thoughts on a NY trip with you, and would love to get together. Just email me artbuff@hotmail.com!

OH WOW, I love your new look too, not that your "old" look was so bad, but your new look is great! I'm so glad the little Astro is better now. Poor thing - I think he needs more puppy treats. You need to be nicer to that sweet little guy. You don't spoil him enough....

I'm so sorry Astro had to go through all that! Sure glad to hear he is better!!

Love your new banner. Jackie is so good at that!

it's time for an updated picture of Astro and a get well report. :-)

Aren't I a pest? hehe