This here is what you call an unhappy Pug... 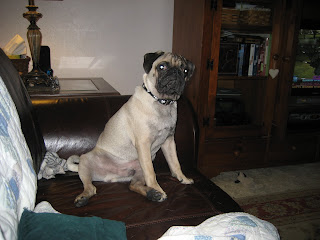 Muttley is now a little over 6 months old. We've clipped his nails once before, no problems. Then his brother Astro had a nail break off in a weird place, and we had to cut it down, which caused blood and much squirming, all of which Muttley was witness to. So when he did his nails later, he wasn't too happy, but he cooperated for the most part (although when I was done, he jumped down and actually looked over his legs and paws to see what I had done to them).

Fast forward two weeks, time to clip again. First big brother, then Muttley.
Astro squirms, but tolerates it cause he knows there will be treats afterwards.
Muttley, to say "not so much" would be putting it mildly.
I have never heard a Pug scream until now. We seriously thought he was going to have a heart attack he was so freaked out. I got one nail clipped and after that, every time I even got near the next nail with the clippers, he would scream and cry and try to fling himself out the window. So one nail is done and that's it.

And now, I'm sitting here trying to figure out what the heck we're going to do for the remainder of his life, which is hopefully a long one, where we can't even touch a nail with the clippers without him having hysterical fits....

Take him to a groomer or vet and have them trim. That way you arent the devil but just safe mom.

I pay $10-ish to my vet when my cat goes in for his physical. For me he is devil spawn trying to trim his nails. For them he is a complete angel - go figure...

Our Bassett Snoopy was the same way. If it were me, I would just take him to the groomer at Petsmart and pay to have it done. Oddly, my cat Purrkins won't let the vet trim his back claws but will tolerate just about anything from me.

Hi there! My dog Ana is the same way when the clippers come out, as a matter of fact she actually runs away and won't come when called...it's funny but sad at the same time.

What we did was buy a dremel. It comes with a sanding piece and we just sand her nails down. It's sort of like the same concept of the Pedifile thing that they advertise on the TV but we bought it before the thing came out so I couldn't tell you if that works as well as the dremel. If you do decide to get a dremel get the one with the cord and not the battery operated cordless one. She's still a little "eh" about the dremel (you can tell by her facial expressions) but she doesn't scream and doesn't give you any problems like she did with the nail clipper.

You could take him to the vet/groomer to get them trimmed but I think you would still be causing psychological harm to your dog. It may get to the point where he may only associate the vet with that and have a heart attack once you enter the office or even park the car.

I have three pugs and those guys just don't like to have their nails trimmed. :-) I have found that if I use a nail trimmer like this one from Dr. Foster and Smith (http://www.drsfostersmith.com/product/prod_display.cfm?pcatid=790) it doesn't seem to pinch as much as the other kind that squeezes together. That and the jar of peanut butter I keep at their nose while doing their nails really helps.

Thank you all so much for your suggestions! I'm going to try Jackie's method first, with the new clippers we're getting from the place Margie recommended and if that doesn't work, we'll be taking him to the vets or groomers as a last resort...
thanks again!!