Organizing my new stitchy closet today, I came across some finishes that I got back from the finisher late last year and never got a picture of until now. There are three or so "smalls" and a big one to share, and here's one of them now: Design by Ewe & Ewe & Friends called "Purple Rosebud Scissor Companion".
I think it was a kit but now may be offered in just chart form.... 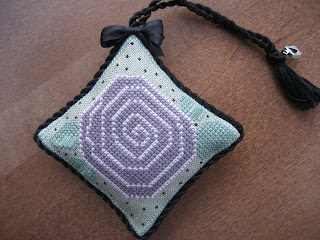 I'll share the others later this week :-)
In the meantime, there's something I have to vent about. There's a coworker at my workplace that got his son a puppy for Christmas. So I've asked about it a few times to see how she (the puppy, she's a Lab) is coming along in her new household. Every time, he starts ranting about it, how bad she is, she jumps on the couch, pees on the floor, etc. Tonight he told me he went to let her out in the rain last night, thought she was outside, but when he turned around, she was at his feet, peeing on the floor. So he said he "lost it". Meaning, he spanked her, probably too hard and too long, as if any of it is warranted in the first place.
It just chaps my behind that a grown man is spanking a puppy! For anything. PERIOD. It's all about behaviour modification with a dog, they don't understand yelling or hitting. So instead of "losing it" with my coworker, I tried explaining some puppy training methods that I've used with our Pugs. Like the water bottle...boy hidee, just SAY "water bottle" around Muttley and he's all "Man, I'm cool, it's all good"...he stops whatever it is he's doing (that's wrong) IMMEDIATELY. And we've only ever actually squirted him with it three times! It works!
So anyhoo, he acted like he was going to take my advise and hopefully he will...
I look at our boys and their sweet faces (see below)...and it makes me sick to think anyone would spank such a loyal and loving companion... 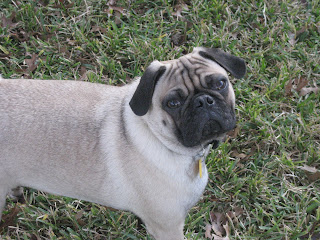 Muttley would like to say "Hi. Can you tell my mama I'm a good boy and she can stop with the water bottle threats already? Thank you so very much."

I use a water bottle too. I say, Im going to get the squirt squirt. It works on all the pups but Pickles.

I agree, I just do not see how anyone could miss treat a loving pet that way.

We use the squirt bottle with The Fluffinator, too. He hates it. Just reaching for it usually is enough. Or if we say "squirt squirt!", he'll growl and slink back to his seat. Usually it's because he barks at animals on TV, which can be VERY annoying.

People should have to go through a screening process before they get a pet. It breaks my heart when animals are abused.

Your Purple Rosebud is gorgeous! I love the little heart charm too.

I love animals too Andrea in every size and shape. I can't stand, I mean that literally, to see one hurt in any way. I hope this man does take your advice because that little puppy doesn't deserve it.

Beautiful pieces Andrea! Deb is fantastic. I do hope your co-worker takes your advice! Poor puppy!

The scissor fob is sooo pretty! and what a gorgeous finish!

Hearing about the puppy being spanked really bothers me too. He should have read up about puppies before he got one! And labs are full of energy, like most puppies!
He's really in for a treat the first year...we may have to plan a puppy intervention later!

I sure don't want to be anywhere near your coworker......or let him anywhere near my Jiggs! First off you don't let a puppy out in the rain, you take him out! Jiggs is having a time of it with housetraining....he knows he's supposed to go outside, he just hasn't figured out how to let us know for sure that is what he needs to do. Just this evening he went to the OG and didn't give a clear signal then came to me and promptly peed on the floor. Did I get mad? No, not really. Jiggs already knew he'd goofed and had his ears down. I told him he was naughty but why should I make him feel worse than he already did. We've used a water bottle with dogs and cats for years; however, I used the bottle on Jiggs a couple of weeks and it scared him and he peed on the carpet.