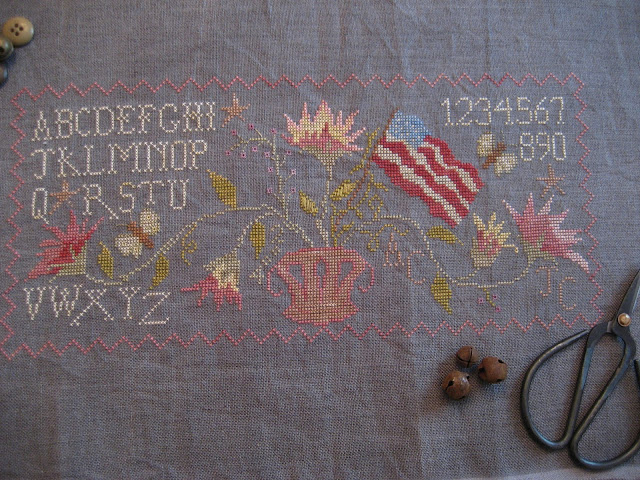 This finish has been a WIP for oh, about seven years. I've posted about it before, my plans were to try and finish it up back then, but it never happened. Oh well, better late than never. 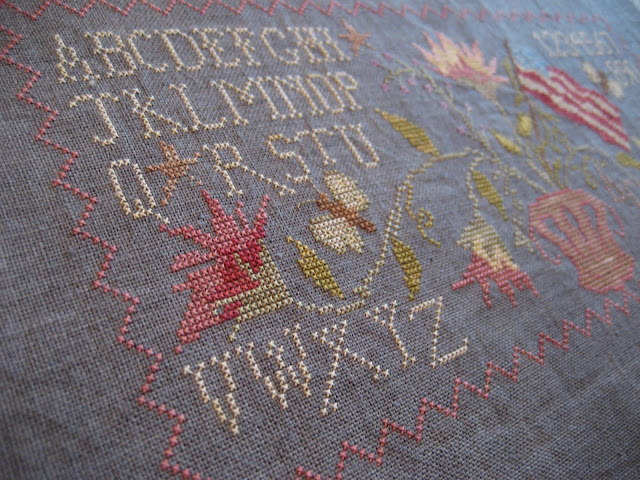 I started on this when the design was first published, in the August 2003 issue of Just Cross Stitch magazine. Can't remember if this is 35 or 40 count fabric, but it is the 18th Century Blackbird linen from R&R, and stitched over 2 with one strand Gentle Art Sampler Threads. 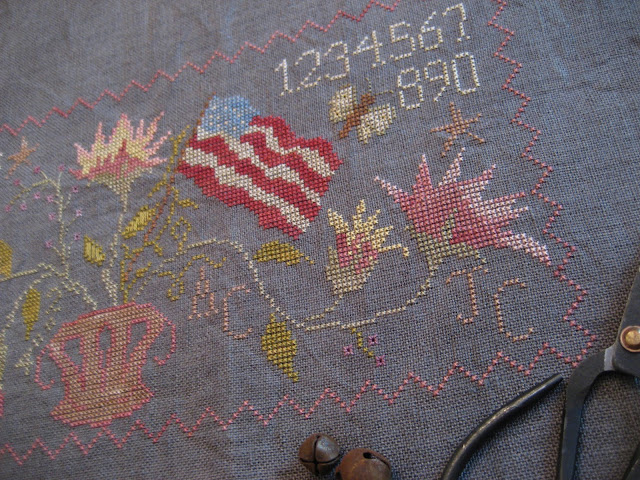 The design is called Summer Jubilee in the magazine. It was published again later in their book "Souvenirs of Summer", not sure if it's called by the same name in that book. Anyway, now that it's finished, I love it! 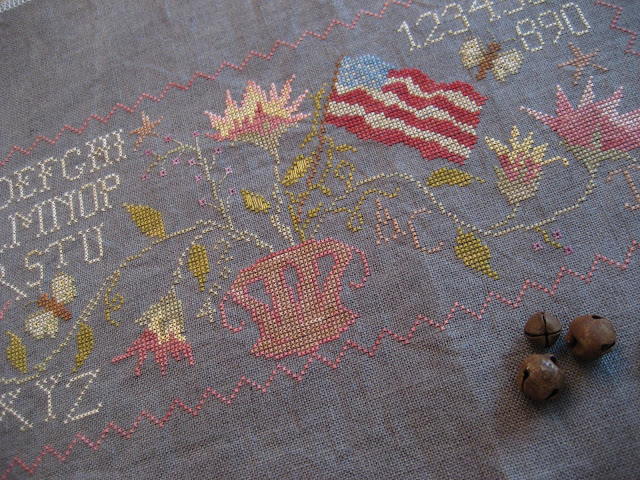 Am I the only person having issues with Blogger and their new improved stuff? OY! I can't get this text aligned right, no matter how many times I push the button, it's driving me MAD!! HELP! 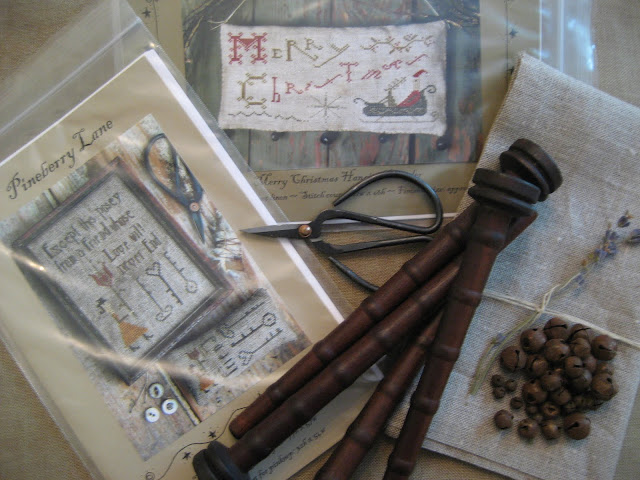 Some charts I've wanted for a while, some scissors, bobbins, fabric, and rusty jingle bells.
I love all of it, although I'm not too sure what to do with the bobbins, they're bigger than I expected :-)

I think they can be used for the bases of pincushions or "make do's". Hmm....

It is SO hot here! Even indoors, taking pictures for this blog, I broke out in perspiration! Summer is just not my favorite time of year, although, we do have the big birthday week coming up in our family, first my daughter has hers on the 30th, mine on the 1st and they're always followed up by the fireworks on the 4th, so that part of summer is usually fun :-) After that, it's just a countdown until Autumn!

Stay cool my friends. Stitch much. Be happy!
xo

Woo hoo on the finish! So what if it took seven years, it's done now and that's what counts. Will you frame it? Finish it off in a pillow. I think it's called the same thing in their book - I stitched this a few years back and think it has the same name! It looks great!

And great new stash too. That will keep you busy inside while it's so hot out!!

And I hear you on blogger - it's been giving me problems all week. And Happy Birthday early if I don't get a chance to wish that too you closer to your actual day!!

It's a beautiful finish! Congratulations!

I love your Summer Jubliee too ~ congrats!

Love your BBD finish! It's so pretty, I love the soft chalky colours on that dark linen. Just gorgeous!

Great finish and perfect timing too! Any finish is a good one no matter how long it takes.

Love the finish on your cross stitch. Wendy at Pineberry has the greatest patterns and supplies. Your spools will make great makedo bases for her dolls or just display them on a shelf or in a large bowl with some wool or flax.
have a great weekend ~
Pam

Wow what a great finish. That fabric is so pretty. How will you finish it up?

I am gonna have to look to see if I can find this magazine.

I would love alittle heat, it is a breezy and cool day in my area. Stay cool girlfriend!

Great finish! Love how it looks on this muted black fabric!

Stay cool...I've been hearing all about the heat in DFW! It's been cool here today...

Love the design and finish! Makes me want to find that pattern and add to my stash LOL! Congratulations!

I love this piece! Fabulous finish! If it is in a book, I need to buy it. I saw that Theresa at Shakespeare's Peddler posted a photo of hers yesterday as well.

Yes, Blogger is giving me fits right now. It won't even let me manipulate the HTML like it normally does. :/

Can you believe it is this hot in June? My poor grass! We are already on water restrictions over on this side of town. We need some rain badly. Stay inside and cool, and have a great birthday!

I love both your finish and your stash!!!! Wow! That BBD piece is just stunning!

Another beautiful finish...love your new stash too!

Good for you on your finish! I have everything for that but haven't started it yet. You make me want to ditch my current project and start on this one. I have a ton of quilts started but after about 5 years they do get finished. Nancy in WI

I love this piece!!! I saw your Carriage House pieces at the shop. Very impressive and beautiful!!! Maybe, it will inspire me to finish my CHS WIP The Villiage of HRH.

Love your finish! Your stash buying is wonderful too! Hugs.

This is so pretty, and the colors are beautiful together! Congratulations on your finish. Hope you can find some air conditioning to spend some time in.

Well done on a great finish, never mind that it has taken all this time. You could always wrap lace or silk ribbon around your bobbins and display them in a wooden bowl.

Aaaah!!! That BBD piece!!! LOVE it!! I actually bought that BBD book just for this pattern after I say it posted on Deb or Terri's blog (can't remember which...) from one of their guild meetings. Just love love love it!! Great finish!!

And your goodies from Pineberry Lane... awesome! I had never heard of them, so glad you posted. They are so wonderfully prim. :)

Have a wonderful birthday, and stay cool!!

Oh my word, I was not even a blog reader when you posted about this project the last time. Back then I had lots of bully babies to kiss and cuddle all day long. It sure was worth finishing and looks great! Cute stash you got there. Really interesting scissors too. Looks a bit like my bonsai scissors although my scissors are much larger. Those bobbins are pretty large but I am sure you will find good use for them. I also like jingle bells. It gives me such a happy feeling with child-like expectations. Is it really that hot where you live? I had to get in bed with a hot water bottle earlier. Crazy!!
Have a lovely weekend.
Alice
xxx

YGG on the finish!! Fabulous! I have had this in my stash forever and really need to get it stitched. Love the new stash, too! Hang in there in the heat. Yikes. :P

What a pretty finish!!! Love that piece and great new stash too :-).

I am with you on summer, not my favorite, I hate to sweat unless I am at the gym ;-).

I love love love your finish. It is so pretty on that fabric. And I have WIPs that have been around longer than that, so no worries! Darn, I am now going to have to see if I can find that chart - it's so perfect for summer stitching! Awesome stash too - I especially love the jingle bells!

It's a really great finish! I'm glad you finally got around to it, because it really is lovely. Also, that's some seriously yummy stash! Hopefully you won't be too hot to enjoy it! :)

Awesome finish, Andrea! This is, I think, one of the prettiest patriotic feeling designs around. Love it! You got some great stash too, gf! I love it all - the scissors are just too darn cute! I swear, I commented on this before but don't see my post so I'm not sure what's going on. I just got home from being in Virginia since last Thursday and trying to blog on my parent's computer was a nightmare. S...L...O...W!

I was going to tell you - those are hand molds for gloves. Mine are dated around 1988 so they're not old but I love them. If you buy them on ebay be careful. The pretty ones are sized small 6-7 or 7 1/2 and are glazed all the way up. Some glove molds are for rubber gloves and they can be huge and not glazed so they're not really very pretty. I'll be on the lookout for you one!

Have a great week!

Love that one Andrea! It's beautiful.

It's a beautiful piece. Congrats! Love the fabric's color goes so well with the threads' color. And I love your new stash too. :) Have a nice day, Andrea.

Only seven years? I have things that are three times that old that I will finish (someday) LOL!! Have a wonderful birthday! And I agree - countdown to Autumn, my second fav time of year; Winter being the first...

Way to go! I haven't seen that sampler in awhile and had forgotten how neat it really is! Just great! I also love your new stash pieces. Fun fun!

Andrea, your BBD finish is lovely! I've gone thru the "piles" and found the pattern and fabric and am inspired to stitch it. Don't worry how long it takes to finish a piece...remember it's fun to stitch. Stay cool and Happy Weekend!
P.S. I'm having trouble with the new set up on blogger also.

Congratulations on your beautiful finish!

BBD patriotic pieces are my favorite...and yours is at the top of the list for me! Just wonderful! I think I'm going to have to stitch something patriotic this week...just because! Love your stash too!!

Hey, I just noticed on the Pineberry Lane piece that "accept" is misspelled "except" in the model. Is the chart like that? Because it should be "Accept this posey from a friend..."

Those stinkin' homophones! They get some folks every time!