Couldn't think of a title for this post, but since that is stuck in my head from the commercial, there it is. I can't even think of what that commercial is for, but that stupid refrain gets stuck in my head for days "a little bit more, a little bit more". Geesh, stop it already. If it's not that it's the Beyonce song, Irreplaceable..."to the left, to the left...all your stuff in the box to the left"....must be pretty empty up there(in my head)to keep rolling this stuff around for hours on end, lol.

So anyway, here's the Queen Bee, finally finished the stitching on her, now to get her made into the stand-up... 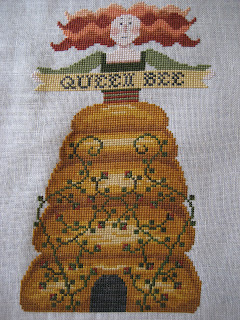 This one took me a lot longer than I thought it would, but was worth it in the end. 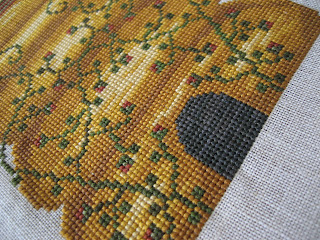 Also picked up my Willow House from the framer this week. I picked the same moulding that we used to frame Quaker Garden in, but the different colors of linen really make each piece look unique. 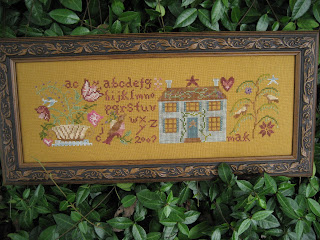 And this week we had a very unhappy Pug in our house, as you can see. 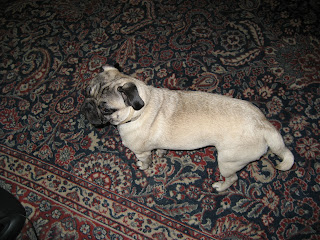 This tail stayed uncurled for the whole day. Not a good thing! 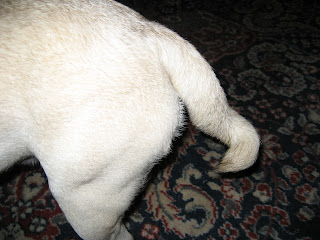 On Thursday he had a bad reaction to the pre-op meds the vet gave him before he was to be neutered. So instead of "snip-snip", he got to come home but he was still mightily upset. He was mostly back to his old self the next day but Friday evening we had potty trips outside every hour and through the night, due to the intestinal upset from the stress. Poor Astro. We're pretty torn up about what to do....have him neutered or not. Vet said she would just not give him those two drugs before the surgery, the risk was less for him without them than to have them again and the bad reaction. But we're thinking, wondering...what if he has a reaction to the anesthesia too? Not sure I could live with myself if he didn't make it through surgery....but don't want him having complications later either.
What to do, what to do?

I am all for spaying & neutering!!! But... if he could die. I would not take that chance. I just would not. If he isn't hiking his leg all over and not humping everything in sight and he is pretty much an indoor dog. I would just leave him as is.

I only say that because Ted's cat got really sick and we had a choice to make and we decided to put him to sleep because we didn't want to spend the money. That was way back when we lived in Texas and Amber was like 5 or 6. We have regretted that decision ever since. We should have spent the money.

Soooo I don't want you to regret anything if you might lose him during surgery. You will be like me... always thinking about it.

Your Queen Bee is very beautiful! The stitching is perfection, and I love her hive dress! Willow House looks lovely in the frame you chose. Oh all your beautiful projects - gasp!

Give Astro a hug from me, and if it was me, and there is a chance something could happen to him , I would just leave it alone. I get very attached to our kitties, and we have two that need spaying, but I hate taking them to the vet!

I didn't get Duffy neutered because the vet was so shocked at the idea when I went to make the appt. I didn't trust him after that. Duff is an indoor dog, is only outside on a leash, and does not mess in the house. The only action he's seen is a slipper! I do believe that if an animal is allowed to roam outdoors that they should be neutered/spayed, but one can be a responsible pet owner and decide against neutering/spaying. Best of luck with your decision!!

Andrea-Your Queen Bee is beautiful. I really like that design.

Regarding Astro. Like Siobhan said, if he's an indoor dog, not allowed to roam, I'd just rethink having him neutered. I would be concerned about his reaction to the anesthesia. Did the vet say if this has happened with other dogs and what they decided to do?

Good luck and hugs to Astro.

Andrea, your Queen Been turned out great! Willow House is perfect in the frame you picked.

Sometimes the decisions we have to make for our four-legged kids are very difficult ones, but I have to agree with what has been said regarding Astro.

Queen Bee looks great! can't wait to see her as a stand up! do you have a spot where she will sit?

the pound where i got max will not let the dogs be adopted until they are spayed/neutered. so i had no choice. they are also microchipped before being allowed to go home to their new family too.

Poor baby. Hope it gets all sorted out. Your Queen Bee is gorgeous, can't wait to see her all finished. I love how your framed piece turned out, it is beautiful with the fabric against that frame. I get those two songs stuck in my head all the time too. LOL!