Not a big fan of the whole holiday weekend thing. Maybe because every time there's a three day weekend, I have to always work two out of those three days while the rest of my family has the time off! I am trying to be nice about it, but seem to be very immature and selfish because I want the same time off for myself!

Anyway, on the stitching front, here's my current WIP, Awake the Dawning Day, the latest in the Loose Feathers series. 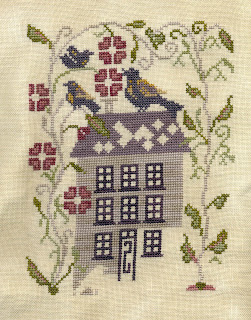 This one is a real pleasure!
I am stitching it on 32 ct. Maritime White (by Lakeside), which is not really so much white as it is creamy, with Weeks threads.
Not too much more to do on this but had to put it aside to work on a gift for someone, which I can't show here ;) but it's from my WIP pile...that ever growing, wicked basket of distractfulness (probably not a word, but whatever)...I almost said basket of sin because every time I look at it I feel guilty and sinful. The basket contains about 8 projects that got dumped by me in favor of other projects that caught my fancy. Eight projects as WIP's doesn't seem so bad but then there's a whole tub in the closet full of them too, the basket just contains ones I'm trying to focus on finishing. Like this one: 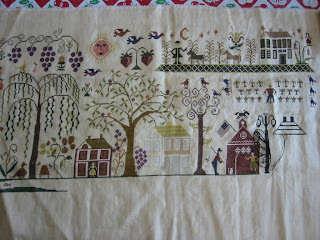 Carriage House Samplings, My Home Town. I was zooming right along on it until those fish came along, they're done over one and while that's usually not a problem for me, the chart on these is a little hard to read, to I tossed it aside instead of sticking to it. I almost got rid of the whole deal the other day, but DH saw it and said NO WAY.

Then there's this one, also in the basket of pain: 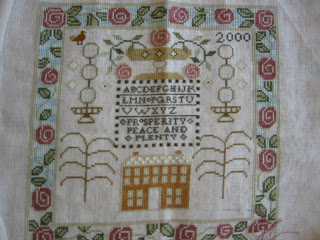 This is The Millennium Sampler by Ewe & Eye & Friends. As you can see, I started it in 2000. For a time I would take it with me to various hospital/doctor visits with DH when he was sick and having problems so maybe it got ditched in favor of something without hospital memories attached to it or something. I would toss it altogether but really love the design and don't even have that far to go on it.

And more WIP's from said basket, shown before on my old blog, but still haunting me, so here we go: 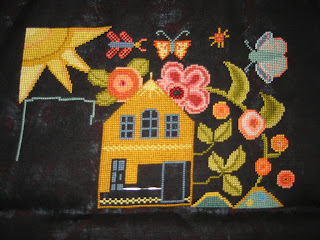 Good Huswife's June Morning, which I truly love, so why can't I finish it????? 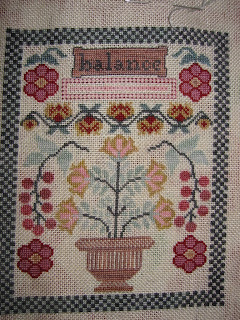 The Heart's Content something or other, maybe it's called "Balance", it's a "Candlestick" kit. Proof that I can, and do, over one with no problems.
Not far to go on it either, what's the deal here??? 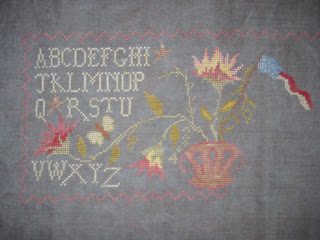 Oh gosh, this one!! Blackbird Designs Summer Jubilee (I think). It was published in a magazine first and then later on in one of their books, Summer Offerings(?) I love this design but decided to stitch it on 40 ct. with one stand of threads, and wasn't too happy with the coverage and am too far along to toss it!

Wish I could find some kind of motivation to get these things finally done and out of my hair and basket. Then I could move some other things in it to torture me, it's really not fair for the WIPS in the tub, never getting a jab in, ever! But it's bad enough having that basket talking to me, do you think I'm fool enough to crack the top of that tub?

All of these are beautiful Andrea, we definitely have the same taste. Keep plugging away, you'll get them done eventually.

Awake the Dawning Day is gorgeous! I'll be starting this one soon so you are inspiration. As for your WIPs - they are all so pretty. I do the same thing - start a lot and put them aside. Then all of a sudden one day I pick one up and stitch until it's finished!

Everything you are working on is so pretty, and many so close to finishing!! You've made me feel good that I'm only working on 5 projects right now ;)

They are all beautiful... just close your eyes and pick one to finish. Your so close.

Really pretty wips, Andrea! I love the June Morning one. Your writing is TOO funny. I love "wicked basket of distractfulness." Why don't you try a rotation schedule? I find that helps when my wips get overwhelming.