To be honest, sometimes I think about deleting this blog. Not sure why I feel the need to tell ya'll that, but like Ree says, "just keepin' it real". Told my husband that (again, as it's an ongoing thought of mine) last night and he told me that he loves to look at it from work, makes him feel like he's home, when he's wishing he was but instead has to work to bring home the bacon.

And since we love the bacon here at Chez Cupcake, guess I'd better just leave it alone...keep the bacon maker happy and all that.

Melissa, your comment on my last post made me laugh, because I've often thought the very same thing....I need to spend less time looking at blogs (and flickr) and stitch more! Seeing so many beautiful finishes makes me want to work on a million things at once and then nothing gets done.

So I guess it's no help to post this finish then, ha. It's not a new one but it came back from Tobie last month after she made it into a pillow for me and I just forgot to post it then. 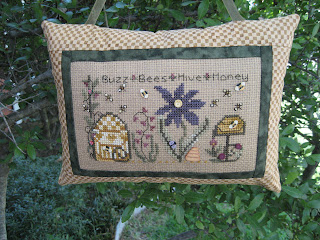 This is Shepherd's Bush "Hive" and I stitched it on the recommended fabric with the threads and buttons it called for. It was a joy to stitch! 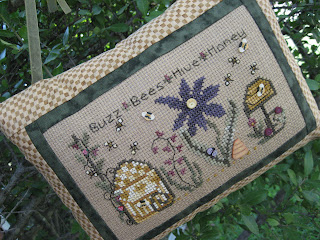 Thanks so much (again) for my few sweet peeps that leave me nice comments. Sometimes I'm discouraged with this blogging business, so it's nice to hear a kind word sometimes!

This piece is very nice. Please don't delete your blog, remember how much work goes into making it in the first place. I know sometimes it is discouraging for those of us who get very few comments. This is what I think of anytime I consider deleting my blog: first, my photos will always be there regardless of what happens to my pc (for as long as blogger is still there), second, I think: in a hundred years or more what kind of historical data will there be, where will it come from. Will people someday find my data from my blog, and will I forever be a part of history, me and my humble stitching projects? Well, anyway that is what I think of. I've got you on my google feeds so you got at least one reader, I'm sure you have much more than you realize, a lot of people don't like to comment they just visit.

"sometimes I think about deleting this blog" OMG perish the thought!!! I may not always leave a comment, but I do really enjoy stopping by to read and see what you've been up to. Your finishes are always so cool, not to mention imspiring. I love the SB pillow!

Ahhh... don't delete your blog Andrea. I'm a faithful reader and would miss not being able to see your finishes or read about the life of Astro!

I, too, am a regular reader of your blog, so I hope you'll keep posting. I know what you mean about reading blogs when you could be stitching. I do that, too. But I also think that reading blogs has inspired me to stitch more consistently. I seriously hope you decide against deleting your blog. You do wonderful work!

Don't delete! I think your blog is great. Though, I think you did delete it one time before. Because I used to read your blog and then one day I couldn't find it. Then I lucked out and found you by accident. So, I hope you will stick around.

The pillow is gorgeous, stitchng and finishing both!

I came back tonight for a second look at your beautiful Daisy Sampler and was pleasantly surprised with Hive. It's wonderful and beautiful finishing.

Please don't delete. Yours is one that I faithfully check every day, and your stitching is such eye candy!

You can't delete your blog--perish the thought!! I check probably twice a day to see if you've updated your blog, and love it so much when you have that I try to read every word v e r y s l o w l y. :)

I love reading your blog!! I hope you don't delete it. You have such gorgeous finishes. Thanks for sharing your world with me! I always think of you when I see ME things!! My favorite magnet on my fridge is a ME you sent me!

Hive is just adorable! I love it! I also love Daisy Sampler. It's on my to do very soon list! :)

You have several GREAT finishes! Bravo!! I enjoy your Blog too! --TraceyIL

I love your blog!!! I love seeing all your beautiful stitching, and it's educational too. I would never have known what fried coke was otherwise! ; )

I am glad you are keeping your blog. I look to your blog for inspiration - you have great finishes!