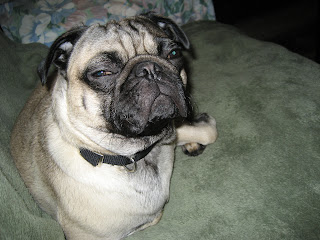 Actually, I think Astro is pretty oblivious, but thought that face was funny anyway.

The Haverty's people didn't show. All day. Finally, at 4:45pm I got a call from the Service center that they needed to order a solution from the manufacturer to apply to the couch and they will call me when that comes in. Like they didn't know that ONE WEEK AGO when I first called them about the stink. I was not very pleased and told them I'd been waiting there ALL DAY, which got me a big sob story about how they'd tried to call me for FIFTEEN minutes but the line was busy so then they figured out they'd written down the wrong area code so once they figured it out they called me right away. Well just call me tickled pink, that accounted for 15 minutes of ALL DAY, whew! Needless to say, if this cupcake doesn't see some action PDQ, she's opening a can of "frosting" on their butts the likes of which have never been seen before.

So to calm my inner rage at the furniture people, I decided to take pictures of my recent stash. Nothing soothes the soul like S.E.X. And if it's not showing up in your mailbox or you can't drive to get it, just pull out what you have and fondle it. You'll feel better, trust me.

Here's some stuff I brought home from the quilt show: 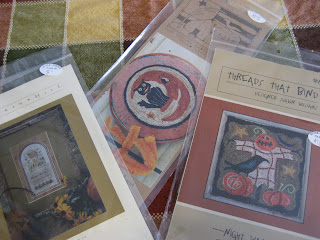 Shepherd's Bush kit Pumpkin Hill and two punch needle patterns. Actually one is a pattern and one is a kit. I was feeling very "pumpkiny" when buying these. 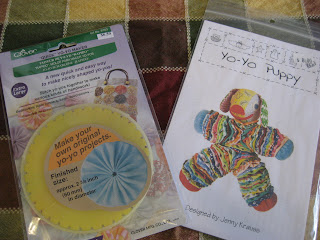 A pattern for a yo-yo puppy and the Clover Yo-Yo maker in extra large to make him. 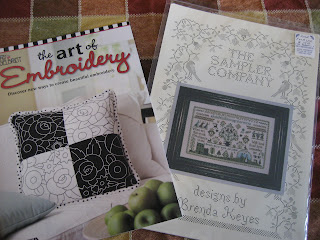 A new Mary Engelbreit book by Leisure Arts (and oh boy, I had fun in their booth, they had Debbie Mumm quilt books on sale for $5 each so I bought all four of them that were there, but forgot to get a picture) and a sampler I've been wanting for a while, Kind Fond Love by Brenda Keyes. 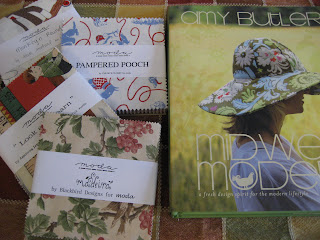 Some charm packs (which I'm addicted to) and the new Amy Butler book. 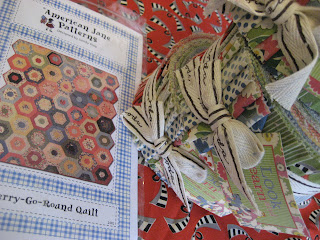 The quilt kit I'd mentioned earlier. They had one of these quilts done up at the Cabbage Rose booth and since I love this line of fabric I just had to get it. 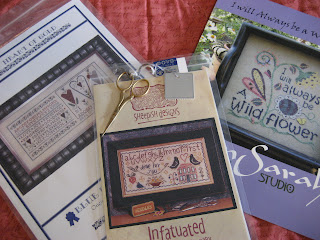 The Wildflower chart I'm stitching for my daughter and the other two I've just wanted for awhile and waited for a month to get them from a certain online place I wont' mention the name of. And only the Dovo scissors in this picture came from the quilt show. DH bought me a new pair because the ones I had just like them he ruined a couple of years ago when he cut some fishing line with them. Oh yes, you read right. Fishing line.

Can you just imagine the can of "frosting" that was opened on him that day?

I love that new ME stitching book. What a gorgeous pillow.

Oh man! I'm sorry you are still living with a stinky sofa. Sounds to me like they should give you a new stink-free one!

I love all your new stash. Stash always settles my nerves. Enjoy!

Andrea-great stash! I love the charm packs too. That new Amy Butler book is on my wish list even though I'm not what you would call someone who sews, but I have her other book might as well buy that one too.

I have Wildflower started, one day it will get finished.

Love all your stash. Sorry about the couch smell. Did you stress that you took off work and they have inconvenienced you beyond belief.

LOL about the cans of frosting!! We call it "Cans of Whoop-A*s" here. My younger daughter is very quick to set people straight if she thinks that they need an attitude adjustment, so we ask her how many cans she had to open when she gets in from school each day. LOL

Love the new stash!! LOL at the pup's face!! Hope your sofa is de-stinkified soon.

Oh, my husband has had a taste of that frosting before! LOL

You got great stash! Can't wait to see your Yo Yo Puppy!! Too cute!!

Oh, your poor husband, whatever was he thinking? Lovely stash. I hope you get your cough straightened out soon.

Oh my gosh, and you let him live?! LOL

OK - with all that stashifying, you need to get on here & show us some pics - surely life, holidays and work are not keeping you so busy you forgot about us!?!?! My dh can sure use a can of that frosting-do you have an etsy shop? BIG hugs to ya!