...the Quilt Show in Houston Texas! I'm headed there bright and early tomorrow (Fri) morning with my BFF and her (our) Mom (she's really not my biological mother but she calls me her "other" daughter, so I call her my "other mother", and we're just tight like that) for three full days of quilt related madness! Maybe (hopefully), some stitching...I'll be taking some WIP's with me.
As you can see, I have a few...

This is my Spooky Spots by Shepherd's Bush, started last year...tried to finish it up this year but it didn't happen. I can't get motivated on this one, which is weird because I like it. 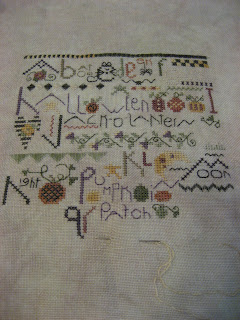 And this one is BOAF's Halloween Fun. Didn't get it finished either because...well, just because... 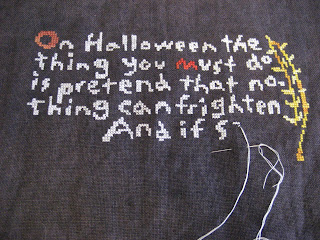 Like I said, I have been all over the place, stitching wise, because what I'm able to work on is dictated to me by how much my hands hurt that day. I pick up one thing and can tell by a few stitches into it, that it's just not going to happen, so then I pick up something else, or nothing.

So. I also started on Curly Q Ewe, by Little House Needleworks, over one on 18 ct. Waterlily... 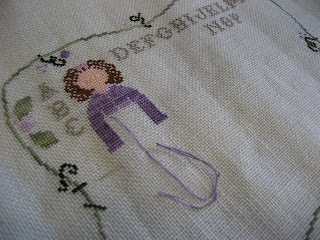 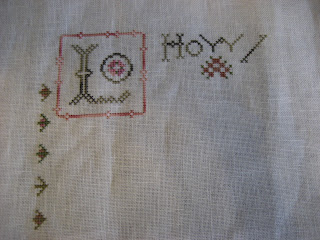 I'm sorta not liking the thread that most of the letters are stitched with, it's WDW London Fog. It has parts of it that are pretty dark, which isn't my favorite. But I pulled the DMC equivalency and didn't care for it, or any close to it, so just decided to stick with the London Fog for now.

OK, in gastronomical news, we recently had Salmon Patties!! Woo hoo, how exciting is that?! LOL. It's about as basic as it gets, but we hadn't had any all summer, somehow I forgot about them which is strange since it's like a tradition to have them in the summertime, always with mac & cheese... 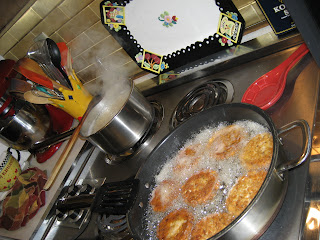 and I halved Ree's recipe for cinnamon rolls, and it still made FOUR PANS full. 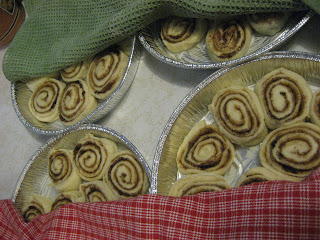 They were pretty good, although I didn't use enough cinnamon. If you make these, be sure to use a LOT of cinnamon (even more than you think is enough). Also, I used much less butter than she did, in the filling. It worked out fine. 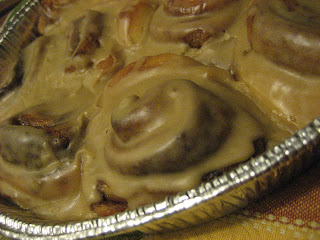 And here are some Deep Fried Oreos, which we had at the fair in October: 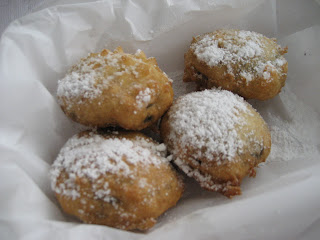 I'd heard so many good things about them. But all I can say is "eh"...nothing to write home about... 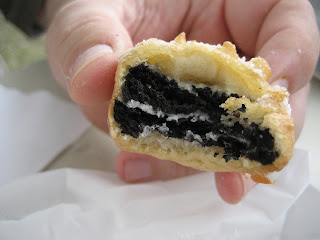 As we stood there waiting while the lady fried them, it seemed to take forever and all I could think of was how much grease they must be absorbing as they fried.
And y'all know I loves me some fried foods, but geesh....greasy Oreos just ain't my thing.

So now I must pack and get together all of my projects and tech stuff (camera, laptop, cords for everything). Wonder if I can pack the Pug to go with?
Maybe there will be time to post from Houston if there's anything exciting to share :)

Your Shepherd's Bush Halloween piece is really cute and so are the others. I am working on 3 different pieces right now and may be adding one or two more, not including an rr that I am in...oh, the sanity.

Lucky you! Enjoy your time at the quilt show.

I love all of your WIPs. Lo A Rose is one of my favorites, and I really must stitch that some time in the near future.

i can't believe your in houston and you dind't let me know! :(

how was the quilt show today?

guess i am just NOT a very good person, sorry

Sorry I missed you at the quilt show...hope you had a good time. Wish I had known you were in town! I did a quick 4 hour run through on Friday without TOO much damage :-)