houston, we had a problem

Wow. Words really fail me when sitting here trying to think of how to write about my trip. To say it was exhausting is putting it mildly. I am just not cut out for that kind of thing. Luckily for the people who put on the show, there are thousands of ladies who are, I'm just not one of them.

This picture is just one end of one row at the show, there were 30 rows of vendors, not to mention all of the quilt exhibits. 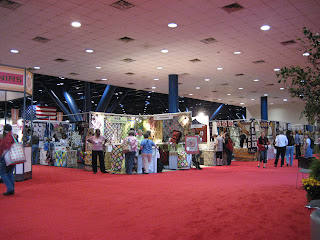 The above picture was taken when sitting down, and I thanked Jesus profusely for the available chair (and thanks again).

We made it through about half of the rows on Friday and I got the chance to pay THREE DOLLARS for a coke and TWO DOLLARS for a bag of potato chips but was so happy to have something cold and also, something that tasted like BBQ, that I didn't complain. Oh heck no. Here's my wallet, just take it.

The hotel transportation (and I use that term very loosely, the actual transporting of their guests was questionable) promised they'd be there to pick us up when it was over the first night, but when we called they told us there was a private party she (the nice lady who drove the shuttle bus) had to take care of. Right in the middle of when their "guests" were needing to get back to the hotel. Bless her heart, on her last trip to the convention center before her private party, she crammed as many of us into the bus as it would hold, legally and otherwise. Have you ever seen grown women arguing about who's been in line the longest, shoving their way into a bus that is meant to hold 12 people MAX?? I stood back and said there's no way I'm going to push my way onto that bus, I just refuse to lower myself to that level.
Well, luckily my right butt cheek ended up getting a spot in the very back of the bus (and I should probably say van, because it wasn't really a bus) on top of a wheel of a dolly or something like that. I think it was a wheel but my butt went to sleep before we could figure it out.

Imagine a "fluffy" cupcake, careening around in the back of a van, in the CARGO area with three other happy quilters, two of which were more crippled that she is and one of which wasn't even on the right shuttle but didn't figure it out until half way there (she just jumped on the first available cargo space and didn't even ask!! That's self preservation at it's finest, I tell ya what!) all around downtown Houston. Oh it was a just dee-lightful!

(Oh and PS, I'll tell you later about the women who rode their brooms into our hotel at the same time as us and who were also on the shuttle the same times as us because that was fun stuff too).

Then, when we crawled out and off of the van, we hobble into the hotel and decide to just eat there because we're too tired to track down anything else (we find out later, there really wasn't much else...that was open anyway). Wait in line 20 minutes but realize we're LUCKY because others have been waiting for 45 minutes, to be seated but there's no menus because they're all at "the big table", meaning, the table of 8 that was seated prior to us. Yes, you guessed it, ALL of the menus were taken. So we wait for a menu and then realize, there is ONE server. At the hotel restaurant! And one bartender. And one "helper" (who did a fine job of setting tables, considering her limp). We found out later that they were OVERSTAFFED. I kid you not. It's a long story, how we found out, but that was straight out of the babe calling himself management. They didn't even KNOW there was the hugest convention of the year going on a few blocks down the road. Yes, overstaffed, so we were so blessed, thank you Jesus for these lukewarm cheese sticks. Yum!

All that was fine, I mean really. Life is good, right? I'm serious. We were so cheerful and happy and no, that is not sarcasm you hear. All of us have faced life or death issues so we knew how to put it all into perspective. We were laughing about it all and can appreciate how very lucky we were to be there experiencing it all. Hoo boy. We made it back to the room and talked about what we'd see and do the following day and then my roomies quickly fell asleep because they were exhausted.

They were really tired (and one a little under the weather) but sleeping well.
And by well, I mean sawing logs that would've made Paul Bunyan proud.

I forgot that a certain cupcake is a light sleeper and didn't even think to ask in advance if there would be snoring on this trip.

Picture me with a panic stricken look on my face and trying not to curse. You know if I was still smoking, picture chain smoking and heavy cursing.

So.....long story short, I call my hubby and say, what oh what shall I do, I got ONE HOUR sleep last night and he says, let's get our own room, I'll drive down! (and he was so lonely without me anyway, seriously...we're joined at the hip, he and I...all these years together).

And so I did. And then he did. And yes, he's good, very good, like that. Coming to my rescue and all.

So he drove down that afternoon, while I slept and we stayed in Saturday night and ate junk food because everything around the hotel was closed and we were both too tired to put forth any effort into finding something decent (and I swear, I've never eaten less on a trip in my life).

Then the next day we made it back to the show and had a grand ol' time for a few hours. Fun was had at the Silver Needle booth. DH found some music he liked and bought 6 cd's. I found this hooked foot stool I'm going to make: 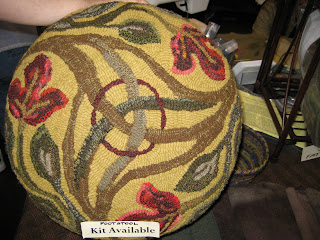 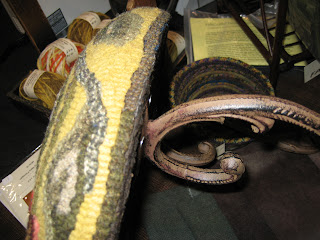 I took several pictures of it because the "kit" was only the hardware for the stool and not any wool strips, so later on I'll get the fun of picking out my own colors and cutting the strips! Oh, I did purchase the canvas too so thankfully there won't be tracing involved.

And I did get a quilt kit too, while there but have been too busy with work and whatever else to get a picture of it, so that'll happen later. (Also have a signed quilting magazine to show you which is too funny but haven't scanned it either).

(What is it about when you take two nights off from work, all hell breaks loose and you end up paying for it for weeks? I'd already said before that every single time I take off, something happens and I end up being punished for it. Well, it happened again, my coworkers wife had a heart attack(!) and subsequent stent placement and she's fine now but I get to work many extra hours to make up for my two measly nights off).

And BONUS! I upset people (without even trying or knowing about it), during and after the trip! I loved that part. Nothing like trying to have fun and yet pissing people off instead, yippee!

But here was the best dang part of the whole trip: 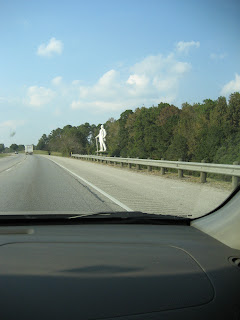 Going home. Home to the Pugs, home to the new very expensive leather couch that stinks.

Heading north on I-45, the Sam Houston monument, which I've always loved, especially at night when it's lighted, (which it wasn't for this photo because we were hightailing it back home during the day). 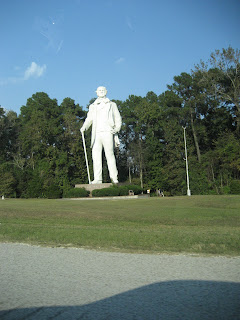 Good-bye Houston, we hardly knew ya.

I just read about someone else's trip to this same show (I think) and it sounds almost the same. The blog address is:
http://stitchingintexas.blogspot.com/
p.s. what a great husband

I really must go to that quilt show next year. I always try to make it to the Dallas Quilt Show though. Thank you so much for your comment on my post today - it really brought a smile to my face! Thank you!

Glad you had fun in H-town! I didn't make it to the show this year, but heard it was awesome. Sorry our town wasn't more hospitable!

Welcome home Andrea! I enjoyed your post, but I think I feel a little sore and tired now! It sounds like your husband made it to your rescue just at the right time.

I love the footstool kit you bought - it's amazingly beautiful! I hope you will have posts while that is in progress. And, that monument? How tall is it anyway?

Take care, get rested, and everything will be back to home sweet home and stitching in no time.

I love that your husband came down to stay with you. He gets the "what a guy award." :-)

Andrea, sorry that you had a less than wonderful time in Houston, especially the bad food part because we have MANY great restaurants. NEXT year, please plan to stay at my house...no pugs but two very sweet cats!

Andrea-sounds like you had a blast regardless of all the inconveniences! I want to hear the stories about pissing people off. Now that should be some fun right there!

What a great DH you have to drive up to share a room, knight in shining armor I tell ya.

the Sam Houston statue is 67 feet tall (I had to look it up). They say it can be seen from 6 miles away.
If you click on the picture and look at the bigger image, you can see people standing to the right of it, at the base. Gives a little perspective :) It's awesome at night when it's all lighted. What gets me is that the trees are so tall as well, and it looks like he's just strolling right out of the woods!

Sounds like a nightmare! But, you have to laugh or go crazy! But, it still sounds like you had some fun. Your DH was just so sweet to come and rescue you.