Today I felt like hugging a total stranger in Hobby Lobby. My friend and I were standing there waiting to check out, the lines were long so they opened another checkout. One lady offered to let another go before her but the second woman declined and said she was just as happy to stand there and wait as anything.....she was just so nice, everything about her. So they started talking a little and the whole thing made me well up inside.

Cause I've been having a big ol' pity party for myself and down in the dumps because my back is hurting worse than ever with the weather being all crazy and all and then work has been hairy too, which is always the case this time of year.

Last week was particularly interesting because two grown people got into a HUGE screaming match over a chair.

Yes, a chair. A man asked if he could have it since no one was sitting in it and the woman who was asked said no, take that one over there. And so it began. LOUD yelling. LOUD cursing. Everyone in the building stopping to watch them. The man then running up to tell me about it, like I could make the grown woman behave, like I'm the "mommy" of them all. I thought the man was going to haul off and hit her and so did she, she even said, "don't you touch me, I'll call the cops". But of course, our off duty officer (who is very highly paid by our organization) didn't show up that night.

Anyway, all that to say...sometimes our customers are real stinkers.

And my back hurts so bad I feel the need to cry and cry hard over it. Such a whiny baby...

And then you see people being kind to each other in a store and it makes you want to hug them and praise them for being so nice to each other.

I seriously debated asking the one gal if I could hug her.

Should have though, don't you think? I really needed a hug anyway.


So anyway, here are some random pictures. I was too tired to get up off the couch to take these, so the views you see are from there.

Our totally 80's Christmas stockings, although I think a couple of them were done in the early 90s'. I can vividly remember being in the craft store, buying these kits, picking each one out as I thought they matched the person they were to be stitched for. Pretty sure they weren't all bought at once though, we were too poor at the time, for that. 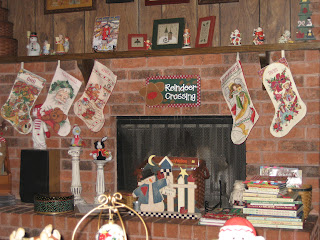 You can see in that pic that our house is still a jumbled up mess. Look at that stack of Christmas books on the right that I pulled out. Most of them are Mary Engelbreit.

And here's a shot of the tree, again from the couch, excuse the lamp: 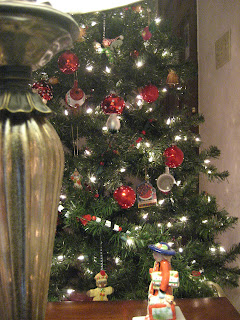 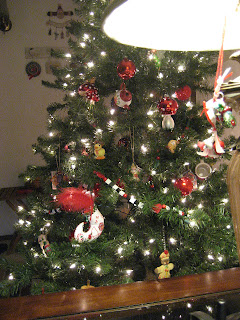 must've gotten up for this one, (I promise to try and get better pics of the whole thing before Christmas is over). 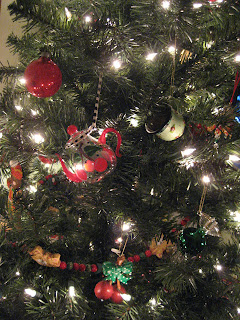 And my little elf pug: 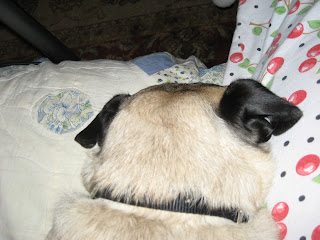 when those velvet ears are upon you, you're not too inclined to move around much ;)
Plus, he's got Pug Hugs. And kisses.

I think your stockings are wonderful! :-) They are nice and big.

I am sorry about your back Andrea. :-( I hope you get to feeling better soon.

Thanks for posting pictures of your tree. Its really nice. :-)

Andrea, your stockings are beautiful. My daughter Katie's name is Katharine too! Love the "Pout" on your mantle...is that a Colorplak or a Cards to Keep?

Andrea--I often wonder about the world we live in when a very small act of kindness makes us feel the urge to hug someone we don't even know. Those acts are just so rare these days. It seems as if people get more pleasure out of being first, making sure they get theirs, that when someone says, "oh go ahead, I'm fine right here for however long it takes." That act seems so noble.

The stockings are gorgeous! I bought many stocking kits in the
80s and for whatever reason never got them stitched, or I saw something I liked better and of course never got those stitched either. We are stockingless around here. We do have Halloween stockings that the Great Pumpkin fills, well in theory anyway. LOL

Hope you're feeling better soon. Sounds like you need to veg out on the couch and read a really good mindless novel.

Sending lots of hugs your way....

It is nice to see people being kind, isn't it? You should have told the lady you needed a hug. She probably would have given you one!

Your house looks so full of Christmas and festive! You did so much work to make your stockings, and I think they are wonderful. Your tree looks pretty with all your Mary Englebreit ornaments, and I love your toadstool ornaments. I love toadstools! Where did you get them?

And, those furry little ears are just adorable. You can always count on your furry creatures to give a hug when no one else is around!

Enjoy your weekend, and I hope your back feels better.

I am sending you a gentle hug, so I won't hurt your back. It is not the big events in life that bring out people's true personalities, it is the small ones.

Your stockings look wonderful hanging on your mantel, and so does the small grouping of Christmas cross stitch sitting on it (had to take a peek). Glad you were able to counteract the unpleasantness a little by tuning in instead to the kindness you witnessed. Hope your back is better soon!!

If I knew how to change the font size on here this would be very very huge:

I can empathize with you with the pain. Sometimes it just over shadows everything doesn't it?
I will defifnitely pray for you.
HAve a Merry Christsmas!

Love all the stockings,your Christmas tree and all your lovely decorations.

Please ask Astro to give you pug hugs for me!

Awww, Andrea... I sure hope your back is feeling better soon! Hugs :)

I hope with some rest your back will be much better. Your tree and stockings look beautiful. If it is any consolation, you are ahead of me. Today I am decorating the tree: well, some of it anyway!
((Your decorations look very Christmas-y and homey))
KimWI

I hate that your back is hurting. Wish I was just a little closer and could bring you some soup and bread!! Maybe the thought will help.

I love your stockings!! I'm sure they have great memories with them!!

oh poor dear ~ I hope your back gets better soon so you'll be dancing under the tree with your sweetie pie hunny bun at midnight on Christmas like all good elves! Sorry to hear you're not feeling 200%. Put your feet up and tell Anita to pass the Nyquil bottle - get some sleep.

I LOVED this blog post because it should've been titled "Christmas As I See It From My Couch" ~ a little bitty view through your eyes - how totally neat! Big hugs.

Ah, Christmas-brings out the best and the worst in folks. Your Christmas decor is lovely-I love your tree. I hope your back feels better soon-it's no fun to be in pain.{{{hugs}}}

Andrea--hope your back is feeling better and you can enjoy the holiday pain free.