again with the peace thing

For some reason I seem to be obsessed with Peace in my stitching... 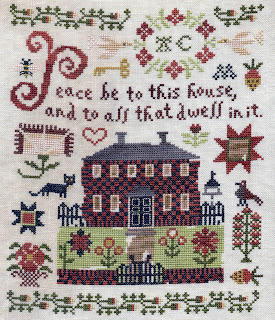 This time of year has never been my favorite, although my oldest daughter was born in April, some 21 years ago which I am thankful and blessed for. But even that was a traumatic experience for everyone involved...a difficult pregnancy followed by a stressful delivery, and a big brother none too happy about the new addition to boot. Anyway, seems like so many bad things have happened in April. Not to mention the beginning of tornado season in our state...we've already had two big storm systems move through this year and we're not even out of April. So maybe the Peace things I've stitched recently really do reflect what I'd like for this time of year, in my life and in the world. Hmm.

The above sampler is by Birds of a Feather and it was stitched on 32 count BOAF Sandpiper linen over two with GA and WDW threads. It was fun to stitch, but when it was done I was pretty happy about it, lol. Didn't realize just how happy it made me until driving home from work the other night and I thought of what stitching awaited me at home and when I remembered it was a new project, it made me very happy!

Here are two pillow finishes from Tobie. The first one is an old Mosey n Me design, I really can't recall the name of it. It's stitched on a huge count of Tula with Thread Gatherer's Sheeps Straw...it was so expensive and although it was OK to work with, I'll don't foresee ever using it again. 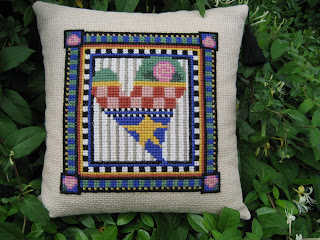 It was a birthday gift for my daughter this year.

This one is from Homespun Elegance...Spring Patchwork pillow or something like that. 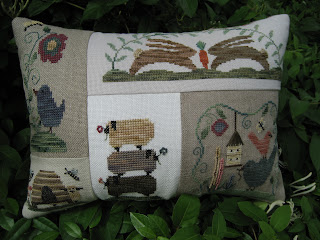 It was stitched on several different pieces of fabric and then pieced together instead of the prefinished form pillow that the design called for. Those things were $30 at the time and I thought that was too much!

Do you see the honeysuckle in these pictures? It's taking over some ivy surrounding the tree in our front yard. Somehow it migrated from the trellis in our back yard and I'm having a really hard time getting it out of the ivy...it just keeps popping up!

Anyhoo, here is our Astro Dazzle, tired from a long hard day of entertaining his peoples. 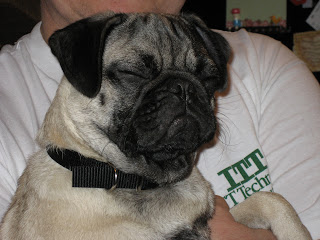 He really does get this tired...so much so that he can't keep his eyes open, lol!
He's 6 months old today, time for a birthday bone!

Andrea-I so understand your feelings about April. March is my April if you know what I mean, oldest son born in March but the rest of the month seems filled with sad memories.

Your Peace is beautiful. I stitched this a few years ago and have it framed. I remember being really happy when it was finished too. It doesn't look like it, but it's kind of a tedious piece. But it's beautiful to look at.

That Astro is too cute!

Hi Andrea,
As always your stitching is a treat to the eye! Your pillows are pretty, but I especially love the Peace sampler. I love BOAF. And, yes, I have seen the LHN Cherry Tree Inn and also feel it's a must have. I love the saying you mentioned on my blog, and I'm glad you enjoyed looking at my little kitchen gallery of art. Astro is too cute!
Wishing you peace,
Nancy

I love your finishes. Isn't it nice to start something new? I always have to restrain myself so I don't have 7 different projects going at once (although after looking at people's blogs, many have more than 7 going) ;)

i wish Max would get so tired he couldn't keep his eyes open. i guess that's what happens since he sleeps all day long. :( he was 10 mos on monday!

i love the BOAF! your sand piper looks a bit lighter than what i have but seeing yours i need to stitch something on mine! :)